When I first heard that the NCAA was strongly considering an expansion to 96 teams, I was 100% against it. To reference The Great Outdoors: after the top 64, "all that's left is gristle and fat." This idea of expansion smelled, actually still smells of a money grab in a TV contract year - basically another bargaining chip to hold against CBS and ESPN to get more and more money. However, with all of the pending changes (conference re-alignments, possible implosion of the Big East, and the possibility of 4 "mega" conferences), I've reconsidered my initial feelings towards expansion. I continue to question whether or not this is a good thing for the sport, so I'm going to try and weigh out the pros and cons and see where we net out.

Ultimately, and rightfully so, money is driving the discussion. Whether we like it or not, the NCAA is a business and the money will eventually go to the colleges and universities. The tournament represents 90% of the NCAA revenue. And even though the 2010 tournament saw an increase in ratings of +5% vs. 2009 (thanks to the NCAA for giving Duke a free ride to the Final Four), it still ranks as the 4th lowest of all time.

Average Ratings For NCAA Tournament Since 1995 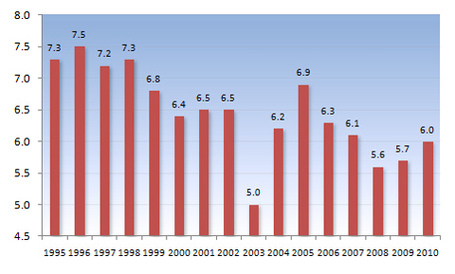 With declining ratings, the NCAA needs something new and innovative to bring to consumers. Add more teams, more games, possibly a few new sites and theoretically that should translate to more money. According to some reports, the plan seems to be working as CBS has offered $840 million per year for 14 years--that's over a trillion dollars!

Expanding the tournament obviously leads to the involvement of more teams. Currently the men's NCAA basketball tournament is the most elite postseason in major American sports, which I believe is what makes it so great. Just 18% (65/347) of teams are invited to participate. Expanding to 96 teams would put participation levels to 27%. Ultimately, allowing more teams could potentially lead to more mid-majors. With that said, Joe Lundardi projected this year's field with 96 teams and here's how it broke down by conference:

Would we really want to see 13 Big East teams? Do we want to see UNC play at all? Do we have the stomach to watch a mediocre Arizona team play another mediocre mid-major in the opening weekend? Just the idea of watching six teams from the Big Ten makes me want to throw up on myself.

Coaches won't be fired as often. Probably the most significant measure of a successful coach is how often they make the tournament, and a lot of coaches are fired because their teams miss the tournament. I really debated on whether or not this is a pro or a con. Ultimately, I figured that as long as there are less coaches being fired, then there will be less coaches moving around. This means there is less of a chance that Marquette will lose Buzz or any other future coach. The con would be that there will be a lot of average, commonplace coaches who won't lose their job because they missed the tournament.

1) Conference Tournaments, not quite as cool anymore

March regular season games and conference tournaments become a competition to play for the first round bye rather than getting into the tournament. March is what makes college basketball so much fun -- the sense of desperation, the miracle runs through the conference tournaments, the importance of every game. March basketball is a drama that is pretty much unmatched in sports. While this will certainly continue for the smaller conferences, the major conferences like the Big East would have teams playing in these tournaments simply as an extension of the regular season, trying to improve their standings in the tournament (to be in the top 32) and coaches trying to keep their players fresh and healthy.

More games = more venues to fill, more traveling for college students, athletes and fans. For those of you who watched the first two rounds of the 2010 tourney, you noticed that New Orleans really struggled to fill half the stadium. Also, it could mean more traveling for fans. Let's face it, what's really the incentive for a mid-major team like Miami of Ohio to travel to a venue to see them play North Carolina, or Arizona?

3) It's harder to gamble

It will really screw up everyone's brackets. Sorry, but it needs to be said. Having a play in game is difficult enough...having to pick another 16 play in games will be unbelievably difficult.

In my opinion the best games of the tournament happen in the first 2 rounds. You get a couple of Cinderella teams who will beat a 3, 4, 5 seed. With the expansion, the bottom teams will be playing one more game before entering the field of 64. Top seeds will be playing teams on 24/48 hour rest....definitely an advantage to the high seeds, ultimately leading to less upsets.

As a Marquette fan, selfishly, I hope for expansion: if the Big East folds due to mega conference expansion, then Marquette is at strong risk of becoming irrelevant and lost in a glorified mid-major basketball conference. Expansion to 96 teams should help Marquette stay relevant a little longer considering they should make the tournament most years. Also, while maybe a stretch, having 96 teams will slow down the turnover in college coaching. This should prevent bigger programs from raiding the Marquette coaching staff.

I think expansion is good if keeps Marquette relevant, but if the NCAA is looking for something to fix, they should spend some time around the BCS championship rather than changing a proven formula.