Freshman midfielder Sebastian Jansson was afforded a special opportunity last night: His father and brother had traveled to Milwaukee from Sweden to see him play in Marquette's match against #12/#13 Notre Dame. While the night would have been special for Jansson regardless of his play, this match will undoubtedly stick out in his memory for a long time.

Just into the 16th minute, Anthony Selvaggi swiped the ball from a Notre Dame defender deep in the Irish zone, took a few dribbles to create some space, and fired a low bounding cross through the box. Jansson charged the net and timed his slide perfectly to the bounce of the ball and poked it past ND keeper Will Walsh for his first collegiate goal and the only goal the Golden Eagles would need to upset the #12/#13 ranked Fighting Irish.

From Mike Nelson and The Marquette Tribune:

"It means a lot," Jansson said of notching his first goal in front of family. "My dad has been my coach since I was six years old. He brought me into the game. I know my brother is trying to go pro over in Sweden and hopefully he’s going get some more determination from seeing me do well over here in America."

Notre Dame out shot Marquette on the night 17-12 and MU keeper David Check had a busy night, making 7 saves, including 2 in the last 7 minutes to preserve the shutout and the win. The victory breaks a 7 match winning streak by Notre Dame in the all time series between the two schools and is Marquette's first victory against the Irish since 1990.

Coach Louis "The Dissident" Bennett on the match:

"We had a plan, the plan didn’t quite work out so we ad libbed," Bennett said. "We did something in soccer that you have to do if you’re a successful team and that’s take what you’ve got and work with it. And (Wednesday) we worked with what we had."

Let's go to the highlights!

After the jump: We admire Marquette's positions in the standings! 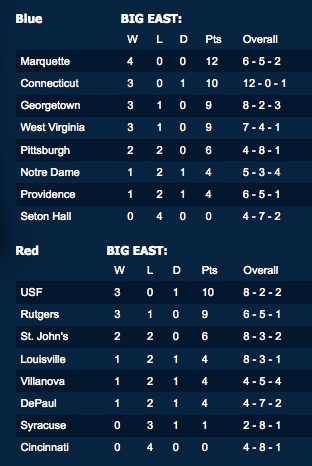 While Connecticut won last night, the good news is that someone finally broke through and scored a goal on them after 9 consecutive shutouts. On to the standings for the new #7 team in the country, YOUR Marquette women's soccer team: 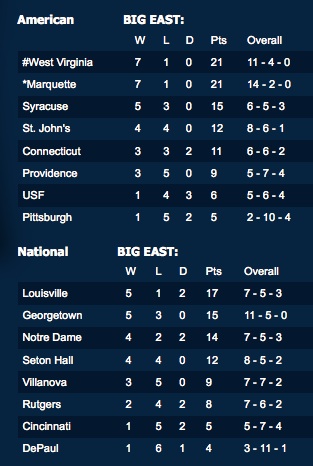 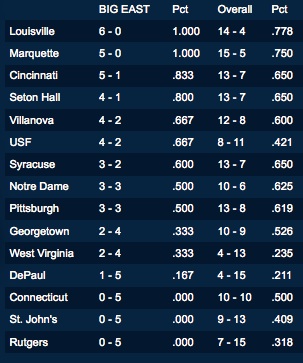 Look, I get that Louisville is the defending Big East champions, but would someone PLEASE step up and beat them already?