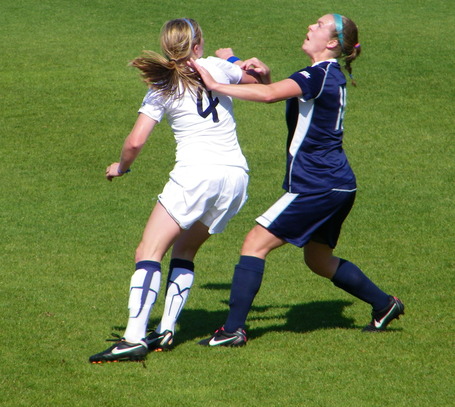 #4 Maegan Kelly looks to avoid defenders and add to her team leading 32 points.

While tonight is Marquette Madness for the men's and women's basketball teams, the women's soccer and volleyball teams will not be in attendance. Both of them will be in New York State for games all through the weekend. #7/#13 women's soccer has two matches, starting tonight in Queens against St. John's. A win over the Red Storm (8-6-1, 4-3-0) will secure a first round bye in the Big East Tournament for Marquette. The match will be St. John's first at home after going 2-2 on a 4 match road trip. They're led by senior Jen Leaverton's 16 points (7G, 2A), including 5 game winning goals. Keeper Kristin Russell has logged the majority of the minutes for the Red Storm, carrying a GAA of 1.03 and a save percentage of .792 while recording 5 shutouts in 11 starts.

If Marquette extends their winning streak to 7 matches against St. John's, they'll have an opportunity to clinch home field advantage in the Big East Tournament quarterfinals on Sunday against the traitorous Syracuse Orange. Syracuse (6-5-3, 5-3-0) will host South Florida tonight in an effort to bounce back from having a 4 match winning streak snapped by West Virginia in their last outing. Keeper Brittany Anghel's 6 shutouts have come in each of Syracuse's 6 wins while Tina Romagnuolo leads the Orange with 4 goals.

Volleyball will invade Syracuse's campus on Saturday afternoon for a match. The Orange (13-7, 3-2) currently lead the Big East in both opponent's hitting percentage at .148 and (unsurprisingly) blocks at 3.08/set. Two of the conference's top 4 in blocks per set play for the Orange, overall Big East leader Samantha Hinz (1.56) and Lindsay McCabe (1.24). Noemie Lefebvre plays all over the court for Syracuse, leading the team with 2.62 kills/set and contributing 3.42 digs/set, which is the second best mark on the team.

Men's soccer has the lone home game of the weekend when West Virginia (7-4-1, 3-1-0) arrives at Valley Fields on Saturday night. Live audio of the match will be available here. The Golden Eagles will have their hands full with the Mountaineers, who have reeled off three straight shutout wins in Big East play while only allowing four shots on goal combined in those matches. Shadow Sebele leads WVU with 15 points (5G, 5A) while Andy Bevin is close behind with 14 points (6G, 2A).