Share All sharing options for: 10.18.11 In Related News: Weekly Honors 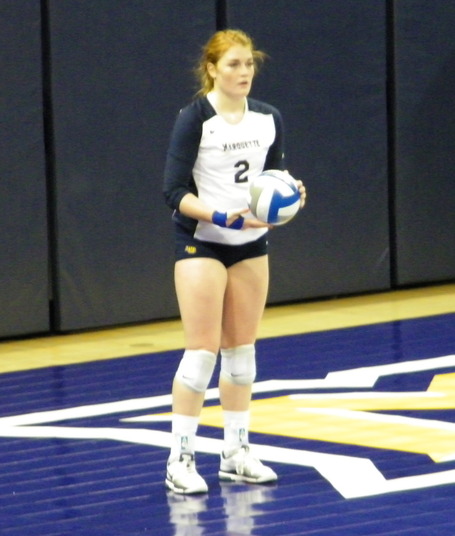 Men's soccer joined in the parade of Marquette athletes picking up weekly honors this week. Junior keeper David Check was named Big East Goalkeeper Of The Week and Sebastian Jansson earned the title of Big East Rookie Of The Week. Check made 10 saves to propel MU to wins over nationally ranked Notre Dame and West Virginia. Jansson picked up the game winning goals in both of those wins. Those goals also earned Jansson a spot on College Soccer News' Team Of The Week and the wins over ranked teams earned the entire team the #30 spot in CSN's top 30 rankings.

The women's soccer team matched the men with 2 Big East honorees this week. Maegan Kelly was named Offensive Player Of The Week. Kelly contributed to four of Marquette's 6 goals last week with 2 goals and 2 assists. Junior defender Ally Miller picked up her second Big East Defensive Player Of The Week on the season for her efforts in helping Marquette hold St. John's and Syracuse to a combined 5 shots on goal. Miller also contributed a goal and an assist against Syracuse.

In some additional honors, TopDrawerSoccer.com named Maegan Kelly to their Team Of The Week and has Marquette ranked as the #4 team overall in their Tournament 64 projections.

Turning to the volleyball team, freshman setter Chelsea Heier's 57 assists against Syracuse helped her pick up Big East Freshman Of The Week honors for the second straight week and the third time overall this season. Heier's outstanding play setting up the Marquette offense is one of the reasons why the NCAA's RPI calculations have Marquette ranked 37th in the country. For comparison purposes, Marquette finished last year 47th in RPI, but was left out of the 64 team NCAA Tournament.