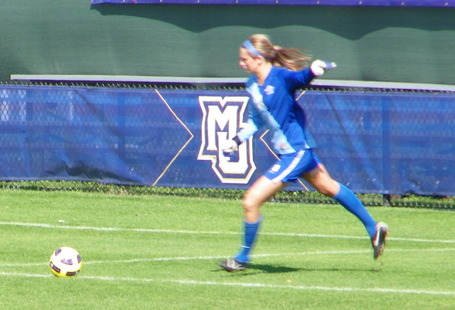 Keeper Natalie Kulla looks to kick her way into the NCAA record book.

While it is important to remember to head out to Valley Fields tonight to cheer on the men's soccer team, we now turn our attention to tomorrow's activities in the Valley. The #5/#9 Marquette Golden Eagles begin their quest to win the 2011 Big East Championship at 1pm against Notre Dame.

Marquette got to this point by finishing in a tie for first place in the American Division, marking their third straight division title. Due to losing a tiebreaker with West Virginia, MU gets the 2 seed in the division, receiving a bye to the quarterfinals and the right to host a quarterfinals match. Sophomore Maegan Kelly leads Marquette in scoring with 38 points (14G, 10A). Kelly has had a historically impressive year on the pitch as the only Big East player to record double digit goals and assists. On top of that, Kelly currently sits 3 goals short of Kate Gordon's program record 17 goals in a season and just 2 points short of Gordon's record of 40 points in a season. Marquette will be best served to do everything they can to help Kelly break both records as the postseason begins, as MU is 22-0-0 when Kelly records a point and 17-0-0 when she scores a goal.

While Kelly chases Marquette records, senior goalkeeper Natalie Kulla chases an NCAA record. Kulla currently stands at 42 shutouts for her career. The NCAA record was set at 44 by Rutgers' Erin Guthrie in 2009. For Kulla to reach the mark, she's going to have to rely on Marquette's stout defense. The Golden Eagles have allowed just 127 shots on goal for the season and just 47 shots on goal.

Notre Dame (9-6-3, 6-3-2) finished in 3rd place in the National Division after being picked to win the division in the preseason coaches' poll. ND's Melissa Henderson was named the Big East Preseason Offensive Player Of The Year and lived up to that billing, leading the Irish and the Big East with 17 goals. Maddie Fox has seen the majority of the time in net for Notre Dame, including all of Marquette's 3-2 overtime win over the Irish in Milwaukee back on September 25th. In that game, Marquette took advantage of quick strikes against Fox, taking a 1-0 lead just 30 seconds into the match on an Ashley Stemmeler goal, as well as securing the win just 18 seconds into overtime, when Taylor Madigan was able to capitalize on a ND turnover.

The winner of this match will go on to the Big East Championship Semifinals at Dick Dlesk Stadium in Morgantown, WV, to face the winner of a quarterfinal match between National Division champion Louisville and American Division 4 seed Providence on Friday, November 4th.