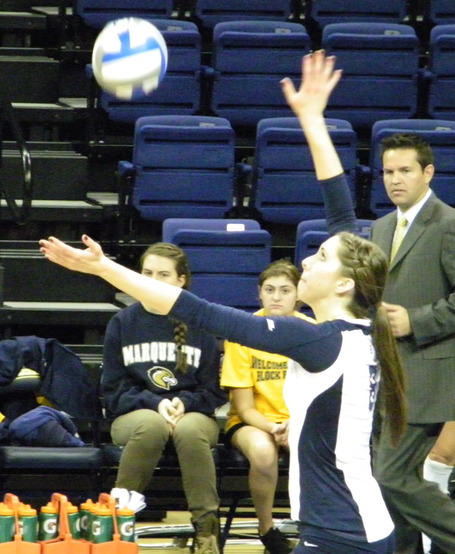 Since we already covered the exciting men's soccer match and the less than thrilling women's soccer match, we'll proceed directly to the women's volleyball team's matches from this weekend!

Marquette started the weekend off hot on Saturday afternoon against traitorous Pittsburgh. A first set hitting percentage of .444 led the way to a 25-19 victory and provided a base for MU to post their best match hitting percentage of the year at .396. From there, it was all Marquette, as they won 25-19 again and 25-16 for the 3-0 sweep of the Panthers. Ashley Beyer led Marquette with 14 kills with Ciara Jones right behind her with 13. Danielle Carlson was even more accurate than usual, and that's saying something for the Big East leader in hitting percentage, as she hit .692 on 13 attacks.

The other half of Marquette's tour through the Backyard Brawl rivalry ended in the same results for MU. Two double digit margins of victory bracketed a MU come from behind win as the Golden Eagles defeated traitorous West Virginia 3-0 (25-14, 25-23, 25-15). Marquette trailed 12-5 and 18-13 before a Rachel Stier service ace put MU up 23-22 and a Danielle Carlson block ended the second set. Ashley Beyer led MU in kills again with 13, while Carlson chipped in 10 on a hitting percentage of .450.

Marquette gets a chance to control their destiny in the standings this weekend with a road trip to 3rd place Cincinnati and 2nd place Louisville.