Tuesday night saw the men's soccer team taking on the #18/19 ranked Northern Illinois Huskies. While the action was up and down the field the whole game, Marquette was the only team registering chances at the net. MU had ten shots in the first half while holding NIU without a shot. 4 Golden Eagle shots were on target and required a save by NIU, including a header from John Mau in the first 90 seconds that a Husky defender had to clear. Halftime brought an ominous sign, as a dog broke free from its owner and ran out onto the pitch. Taking a lead from their canine brethren, the Huskies broke free from Marquette's defense, outshooting MU 9-6 in the second half. The Golden Eagle defense withstood the attack, though, and Marquette keeper David Check didn't have to make a save until just into the 89th minute. As you can tell from the lack of discussion of scoring, this match went to overtime, and in fact, it required 16:57 of additional play before NIU's Jayson LeSeth fired a shot to the far top corner of the net and just past Check's outstretched hand for the golden goal. The loss snaps Marquette's 5 game unbeaten streak and ends their non-conference record at 2-5-2.

Changing sports for a minute, keeper Natalie Kulla was named as a finalist for the Lowe's Senior CLASS Award for women's soccer. Fan voting will be combined with media and coaches votes to determine the winner. You can register a vote once per day, and Kulla is currently in 4th place with 10.6% of the votes. Did I mention that you get to vote for Natalie?

After the jump: Two weekly award winners and a standings check!

Women's soccer defender Kerry McBride was named to the Big East Weekly Honor Roll and TopDrawerSoccer.com's Team Of The Week for her contributions to holding Cincinnati and Louisvlle to one shot each in Marquette's two shutouts last week. Also picking up a Big East Honor Roll spot was volleyball's Danielle Carlson. The junior middle hitter hit a blistering .508 in 3 matches last week while committing just 3 errors. Carlson leads the Big East in hitting percentage at .421 and stands 10th nationally. 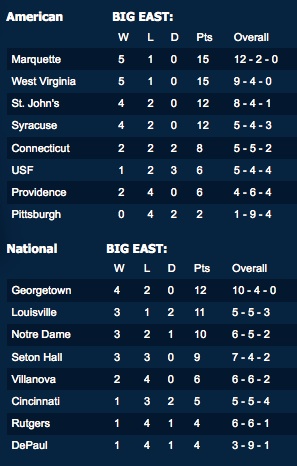 Nice! WVU snagged a loss! Now we just need them to lose another divisional game. Next, men's soccer: 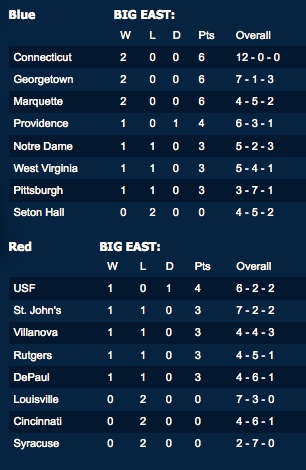 There's a chance for Marquette to break up that logjam at the top of the Blue Division with a Saturday match at Providence. Last up, volleyball: 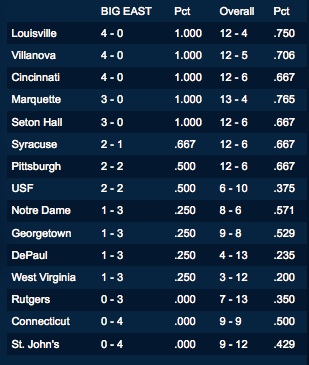 Sunday brings the Villanova Wildcats to the Al McGuire Center, so that'll be a great opportunity for Marquette to assert control over the standings.