Katherine Plouffe hit both ends of a 1-and-1 with 1:45 remaining to give Marquette their first lead since the 18:45 mark of the 2nd half and Sarina Simmons hit two FTs with 5 seconds left to make it impossible for Jade Davis' buzzer beater 3 pointer to matter and give Marquette a 54-52 victory over rival Wisconsin.

Marquette had built a 19-10 lead in the first 12 minutes of the game, but then made just 3 of their next 16 shots to let the Badgers tie the game at half and build a 6 point lead with 16 minutes left in the game. But that would be Wisconsin's biggest lead and Marquette spent the rest of the half slowly digging their way back, tying the game 4 times before Plouffe's FTs gave Marquette the lead for good.

Thoughts on what I saw:

After the jump: Four Factors, awards, and whimsy!

Let's look at the Four Factors for tonight's game.

Abby Willenborg Player Of The Game: After having to play in spurts in the first half because of 2 fouls in the first 8 minutes, Sarina Simmons roared back in the 2nd half, racking up 17 of her game high 23 points. She also tacked on 6 rebounds and 3 steals.

Clare Barnard Undersung Eagle Of The Game: We're going to go with Gabi Minix here. She played every minute but 1 and contributed all across the box score with 7 points, 3 rebounds, and 6 assists against just 1 turnover.

It's a bag of puppies! (h/t to kop face via Agent M Loves Tacos) 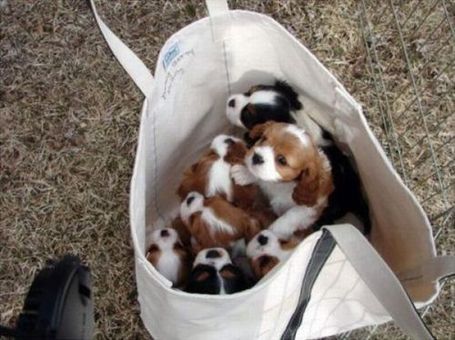