Losing To Marquette May Cause Psychological Trauma

Share All sharing options for: Losing To Marquette May Cause Psychological Trauma

Hey, remember when Marquette beat Wisconsin in the Kohl Center back on Saturday? MAN, that was awesome! Todd Mayo had that crazy high floater, and Vander Blue had that big triple from the sideline to silence the boos, and "WE ARE MARQUETTE" chants broke out constantly, and Badger fans started heading for the exits when there was still a chance that they could win the game?

That was so awesome.

Andrei Greska of Paint Touches and Marquette Tribune fame wrote a very nice column for the Trib on Tuesday about how the invading Marquette fans in the Kohl Center ripped the title of "Wisconsin's Best Fans" out of the hands of Bucky's backers. While that was just one man's opinion, it would appear that Andrei's point is more true than not. 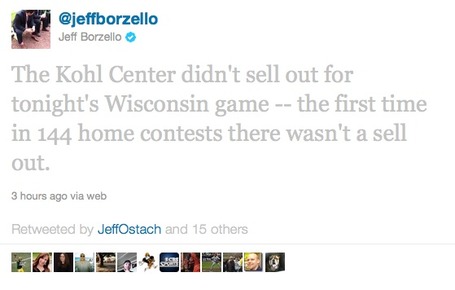 According to Wisconsin's very own post game notes, the official attendance was 17,076, the first time since 2003 that they did not fill the 17,230 capacity of the Kohl Center (Thanks, Wikipedia!) To emphasize the point of how empty the Kohl Center was for this game, they claimed the attendance for the Marquette game was capacity, but the two seats next to me stayed empty all game, not to mention large swaths of the 200 level.

Thus, we can draw just one conclusion from this: Losing basketball games to Marquette causes fan bases to lose faith in their team and stop attending the games.

** - Especially not to Bucky fans.