#21 For The Bulls, #1 For Your Recruiting Future

Share All sharing options for: #21 For The Bulls, #1 For Your Recruiting Future 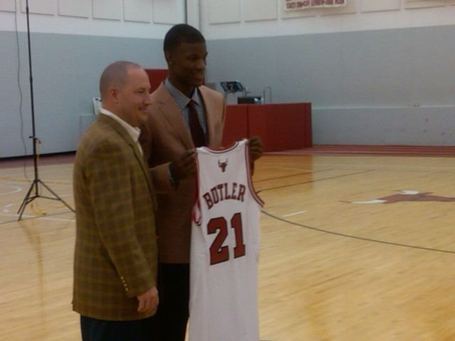 As we may have mentioned once or twice or thrice here at Anonymous Eagle, Jimmy Butler has gone from playing for your Marquette Golden Eagles to getting a first-round-draft-pick guaranteed contract from the Chicago Bulls.  This is obviously fantastic news.  But what might be getting overlooked is what it means for Marquette and head coach Buzz Williams going forward.

The fact of the matter is that Buzz has now moved his very first recruit at Marquette to a guaranteed NBA contract.  And while Wesley Matthews bootstrapping his way to a roster spot and then a starting spot on the playoff bound Utah Jazz and a big free agent contract with the Portland Trail Blazers, in addition to Lazar Hayward getting drafted in the first round last year were great stepping stones for Buzz as a coach, having his own recruit as a first round pick is a big step for Buzz as a recruiter.

And that's just the face value of what Jimmy Butler being drafted means.  At this point, we've all heard the story of his life since he was 13.  Jimmy got overlooked by his own biological family, and then for years just kept getting overlooked by everyone until he was permanently taken in by Michelle Lambert and family before his senior year.  That stability didn't help Jimmy's college basketball prospects, though.  As reported by noted Marquette loyalist @BBaranowski on Twitter, Buzz was on The Score 670AM in Chicago on Draft Night after Jimmy was drafted and said that Jimmy was ranked 81st on the college prospect list coming out of TEXAS high schools. Not nationally, not regionally.  Just TEXAS.  He ended up getting overlooked by every D1 program and went to Tyler Junior College where all he did was average 18-7-3 and help Tyler win its first outright league title in 21 years while rooming with noted Buzz Williams loyalist Joe Fulce.  This led to Buzz finding out about JB before anyone else and locking him up to a Letter Of Intent before Buzz even hired an assistant coach.

By my count, that means Jimmy Butler was overlooked FOUR DIFFERENT TIMES before Buzz was the one to see Big East caliber talent in him.  And Buzz took what he saw and developed it into an NBA Draft first round pick and a three-year guaranteed contract.  This is a substantial recruiting chip for Buzz.  He took a player that NO ONE gave a chance to (and that includes us when he was signed, don't lie) and turned him into an NBA player.

This works in two ways for Buzz in the future.  He can now walk into any recruit's living room and say "No one gave Jimmy Butler a chance until I did and he's already in The Association."  If it's a high profile recruit, all he has to do is buy in and go places with Buzz and Marquette.  If it's a lower profile recruit, he knows that Buzz's style and mentality leads to NBA scouts and GMs viewing him as "a typical Marquette guy," (and boy, I love seeing articles listing that as part of Jimmy's profile) and that's a ticket to the NBA for a guy who isn't getting much notice at that point.

So here we are, with Marquette having first round NBA draft picks in consecutive years for the first time since Bo Ellis and Butch Lee were selected in 1977 and 1978, and yet somehow, I believe that things are only getting started for Buzz and his program.