Reseating Continues And A Short Story About Customer Service

Share All sharing options for: Reseating Continues And A Short Story About Customer Service

We've crossed the halfway point in the 2011 men's basketball reseating process and the Bradley Center Overhead Map is starting to look very full: 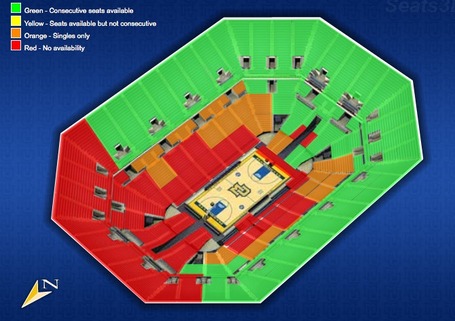 From clicking around on the upper deck sections, it would appear that most of the sideline sections already have the first few rows occupied already.  With strong season ticket sales like this, it's very easy to see how Marquette finished #11 in the country in average attendance this past season.

As I mentioned in my last update, my assigned time was 3:25pm yesterday afternoon.  Forces beyond my control took me away from a computer for about 15 minutes right around there, so I was logging in a little behind schedule to select my tickets.  But it was nice to see that someone in the athletics department was paying close enough attention to not only see that I hadn't selected seats yet (and therefore people were passing me by as if I were the Minnesota Vikings), but to know that they had an easy and quick way to get in touch with me: Twitter.  Now, by the time I actually saw the tweet they had sent, I had already selected my seats.  But it's nice to know that not only is the MU athletics department taking a strong interest in their Twitter community, but that they're looking out for season ticket holders and willing to jump in if need be and prevent them from slipping too far down the selection list.