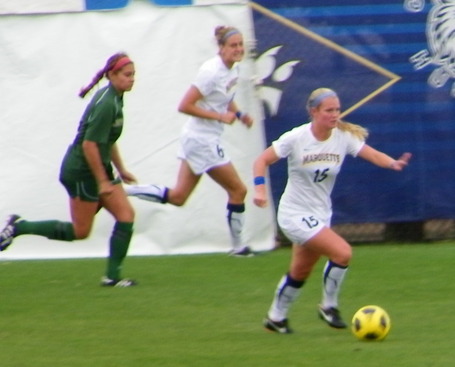 #15 Taylor Madigan looks to advance the ball with #6 Ashley Stemmeler following in support.

3 and 0 were the Marquette women's volleyball team's favorite numbers over the weekend, as they went 3-0 to win the Marquette/Milwaukee Invitational, beating Southern Miss, Akron, and UW-Milwaukee with each win coming as a result of a 3-0 sweep. Ciara Jones and Ashley Beyer both registered double digit kills in all three matches and Beyer snagged her second double double of the season with 10 kills and 13 digs against Southern Miss. While each game had its own share of battles, Marquette stayed in control of the matches for most of the weekend, averaging just 18 points allowed across the 9 contests. Beyer, Danielle Carlson, and Julie Jeziorowski were all named to the all-tournament team. Chelsea Heier's 12.15 assists per set is the best average in the Big East.

Men's soccer fell to 1-4-0 on the season as a result of identical 2-1 losses over the weekend, and I do mean identical. Marquette fell behind both UW-Milwaukee and Wright State 2-0 before goals by Andy Huftalin (70th minute versus UWM) and C. Nortey (60th minute vs Wright State) cut into the leads. The Golden Eagles held advantages in shots and corner kicks in both matches, but were unable to capitalize on their offensive advantages.

Marquette women's soccer closed out their non-conference schedule with a 2-1 win over Indiana. The Hoosiers got on the board just 37 seconds in with an Orianica Velasquez goal, but it was all Golden Eagles from that point on. Maegan Kelly evened the sides in the 8th minute off of an Indiana turnover deep in their own zone and Taylor Madigan buried a Vanessa Legault-Cordisco cross in the 63rd minute for the game winner. The shot totals were close (18-13 favoring MU), but Natalie Kulla only had to make 1 save in each half for her 47th career win while her teammates piled the pressure on Indiana keeper Lindsay Campbell, forcing her to make 7 saves to keep the Hoosiers in the game. Kelly's goal moved her scoring streak to three games and she leads Marquette with 8 goals on the season.