Share All sharing options for: 9.16.11 Weekend Preview With A Hint Of Recap 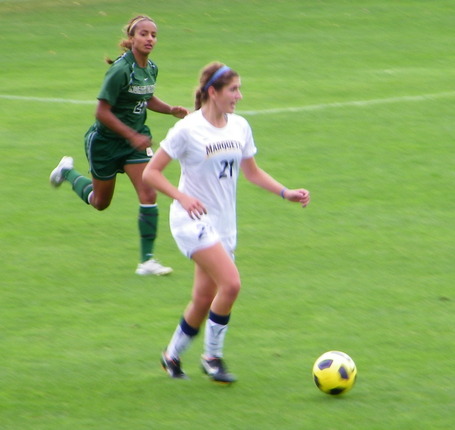 #21 Haley Fritzlen had the longest run of any bench player for MU vs Pitt with 51 minutes played.

Being a streaky team isn't something you usually want to see, but for the newly top 10 ranked Marquette women's soccer team, it's working out pretty well for them right now. Maegan Kelly netted a goal in her fourth straight game with what would end up being her 4th game winner of the season in a 3-0 win over Pitt to begin Big East play last night. The win was Marquette's 16th straight in regular season Big East play and it extended MU's unbeaten streak in Big East play to 19 in a row. In further streaking news, the #8/#9 Golden Eagles have won 14 straight at Valley Fields and continue their dominance over Pitt, moving to 6-0-1 all time. The shutout was Natalie Kulla's 3rd straight in Big East play, giving her a scoreless streak of 294:11 dating back to last season. It was also the 36th of Kulla's career, moving her into a tie for third place all time in NCAA history.

On a more local historical news, Kelly's goal was the 16th of her career, good enough for 10th place in Marquette history while she's tied for 7th in program history with 7 game winners. What makes these numbers even more impressive is that Kelly is only 9 games into her SOPHOMORE season. While it's obvious at this point that Natalie Kulla will finish her MU career this season as Marquette's most accomplished keeper, it's worth keeping an eye on what Maegan Kelly will be able to accomplish with the TWO AND A HALF SEASONS she has remaining.

The women's soccer team will head to Morgantown, West Virginia on Sunday for their first road game of the Big East schedule against the West Virginia Mountaineers. WVU comes in 5-3 on the year and fresh off of a 2-1 2OT win over South Florida to open their Big East slate. Nine different Mountaineers have scored goals this season and their only home loss on the season was to #18 Ohio State.

After the jump: A look at men's soccer and women's volleyball coming up this weekend!

The volleyball team looks to continue their 5 match winning streak with 2 matches in the Al McGuire Center this weekend as part of the Marquette Challenge. First up is Middle Tennessee State tonight. This match will be the front end of a home and home series that Marquette will play with the Blue Raiders this season, with a trip to their gym coming up in mid-October. MTSU carries a season record of 2-6 after dropping the last 4 matches they've played, all in their home gym. Ashley Adams leads MTSU with 118 kills on the season.

Coming up on Sunday afternoon at 2pm, Marquette will host a top 10 team for the first time in program history when the #9 Minnesota Golden Gophers travel to Milwaukee. The Gophers will play MTSU on Saturday as part of the Challenge and have a season record of 5-2. They're led by Ashley Wittman's 132 kills and junior setter Mia Tabberson is averaging 12 assists per set. With the Bears-Saints game tragically being kept off of Milwaukee area television, this loyal sports reporter will be at the match LIVE and in person. If you follow me on Twitter, expect a picture of my awesome free rally towel.

Men's soccer looks to get some wins under their belt before Big East play begins with a home and home series against the Big Ten teams of the state of Michigan this weekend. The Spartans arrive at Valley Fields this evening with an eye on getting their season back on track. Ranked #19 by the NCSAA preseason poll, Michigan State has only managed one win in 5 contests so far this season, generating just 2 goals in their 4 losses. Game time is at 7:05, although you'll want to get there early if you like free food from Qdoba.

Sunday brings a trip to Ann Arbor and a match against Michigan. The Wolverines have come out on the losing end just as many times as their cross state rivals so far this season, but have managed to snare 2 wins and a tie as well. Marquette will be the 4th Big East team that Michigan has seen this season, with an exhibition loss to Louisville and a tie against Georgetown coming before their match with #22 Notre Dame this evening.