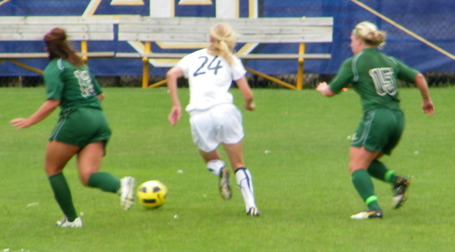 Women's volleyball opened their weekend and the Marquette Challenge with a 3-1 win over Middle Tennessee State. Things got off to a bad start as Marquette dropped the first set 25-16 while committing 11 attacking errors and hitting a woeful -.032. Things got worse for the Golden Eagles as they fell behind 22-16 in the second set before reeling off 9 of the final 10 points of the set to take a 25-23 win, including three straight service aces from setter Chelsea Heier that tied things at 22. MTSU showed the talent that won them the Sun Belt Conference a year ago and kept things close the rest of the way behind 14 kills each from Ashley Adams and Alyssa Wistrick, but MU prevailed in each of the last two sets with a score of 25-23 in both to earn the match victory. Ciara Jones led MU with 16 kills and Courtney Mrotek tallied 12 kills on just 20 attacks with only one error.

Sunday brought the finale of the Marquette Challenge against #9 Minnesota. The Golden Gophers proved themselves as a top 10 team, defeating Marquette 3-2 (25-17, 22-25, 27-29, 25-20, 15-12). The highlight of the match was the the third set. In a spot where either team could take control of the match, there were 14 ties and 7 lead changes as MU and UM had to play 8 extra points to determine a winner before Marquette eventually prevailed to take the 2-1 lead in front of a raucous partisan Marquette crowd. But they couldn't take advantage of their lead as Minnesota took each of the last two sets to take the Marquette Challenge title, including the 5th set with a final score of 15-12.

[minor rant] I don't understand why the 5th set is played to 15 points. In a set where the game is on the line, all of a sudden, the rules change. I'm sure some of you are shouting at me about how this raises the importance of every single point in the set. But having been in the building on Sunday for this match, I can absolutely tell you that the 29-27 3rd set was WAY more exciting and interesting than the 5th set. Why wouldn't you want a finale that has a chance to build up drama like that third set did? [end minor rant]

Jones led Marquette with a career high 24 kills, which powered her to a spot on the all-tournament team, where she was joined by teammates Julie Jeziorowski and Ashley Beyer.

After the jump: Soccer stories!

Men's soccer went undefeated on the weekend to move to 2-4-1 on the season heading into the Big East schedule. On Friday night, Marquette and Michigan State played to a 1-1 draw. Calum Mallace scored for MU on a penalty kick to take the lead but Spartan midfielder Fatai Alashe notched the equalizer in the 83rd minute. Marquette had a ball hit the back of the net in the first half when C. Nortey got a shot past MSU keeper Jeremy Clark off of a rebound of an Andy Huftalin shot, but it was waived off for an offsides call. Michigan State had a 24-15 advantage on shots, but 11 of those shots came in the 2nd half in between the two goals. Even with that heavy of a shot disadvantage, Marquette was still playing solid defense, as David Check only needed to make 5 saves to preserve the tie.

On Sunday, I suddenly realized that men's soccer coach is taking lessons from Buzz Williams when it comes to instilling last minute drama into his team's games. The match against Michigan was Marquette's 3rd match of the season to go to 2 overtime periods and the 3rd to be decided on a goal in the last minute as Kelmend Islami ran down a David Check dropkick and lofted it over a sprawling Adam Grinwis in the 110th minute for the golden goal and the 2-1 win. You can see the goal here at the 1:30 mark of the video. Michigan had taken an early lead in the 11th minute when Adam Shaw scored off of a rebound. Marquette managed to tie things in the second half when Grinwis couldn't control a shot in the 73rd minute and Nortey pounced on the free ball and struck it in from three yards out.

It turns out that streaks in soccer are exactly like no-hitters in baseball. I talked about the Golden Eagles' ongoing streaks on Friday, and on Sunday, the women's team lost a match in regular season Big East play for the first time since 2009, falling to West Virginia, 3-1. The Mountaineers used goals by Blake Miller and Kate Schwindel 3:30 apart separated by halftime to take control of the match. Freshman Mary Luba scored MU's only goal in the 87th minute to avoid the shutout. This game was a drastic change from the women's usual MO this season, as they were outshot 16-9 by WVU and Natalie Kulla made a season high five saves.