Marquette Football: Undefeated Since 1960 And Staying That Way

Share All sharing options for: Marquette Football: Undefeated Since 1960 And Staying That Way

This morning on 1250 WSSP in Milwaukee, Mike Wickett followed up his tweet babbling about the possibility of a Marquette football team by actually bothering Marquette Interim Athletic Director Mike Broeker with a question about it. Broeker completely blew Wickett and co-host Chuck Freimund off, saying "No. And quite honestly: I understand that question, but that wouldn't solve any issues right now." That's exactly the right answer you want to hear from a guy who knows that the future is much more serious than idiot plans like starting a football team.

Look, people. The fact of the matter is that there is not going to be a Marquette D1 football team, either in the idiot Bowl Subdivision or the Championship Subdivision. Discussing it is a waste of effort in these tumultuous times, so we're going to lay out the exact reasons why this isn't happening now or ever.

According to the NCAA's 2010 attendance numbers, the lowest average attendance in D1 FBS is Ball State at 8,947. They're the only school under 10K, and they have a 25K seat stadium to get to that number. Since we obviously don't want to be chumps like DePaul and play games that are a 25-minute drive from campus, that means building a 25,000 seat football stadium in downtown Milwaukee. Anyone want to tell me where the space for that is? Also important: coming up with the money for it. Right now, the university's trying to figure out how to find the money to build the other half of the new engineering building that was cut out of the project because the economy went to hell. In case you were wondering, Akron built a 27,000 seat stadium that opened two years ago, and that cost $61.6 million just for the construction costs.

I'm sure you dreamers are shouting two things at your screen right now: Valley Fields and Miller Park. Building 25K seats around the football field at Valley Fields is out of the question, due to it being completely pinned in on four sides by, going clockwise starting in the north, the Menomonee River, the 16th Street Viaduct, Canal Street and Potowatomi Casino, and the rest of Valley Fields. And that's without getting into where you're going to park 10,000 cars down there. Miller Park is equally stupid, unless you like not playing any home games until November. Oh, and by the way, the distance from the plate to the right and left field corners is only 115 yards, and you kind of need 120 for the field and 140 for player safety.

2. The Blue And Gold Fund Doesn't Cover The Scholarships MU Can Hand Out Now.

The NCAA allows Marquette to offer 110 equivalent athletic scholarships based on our 14 intercollegiate sports, but last year we had the funds award only 92.

In picture form, because I know it's easier for some people to receive information visually: 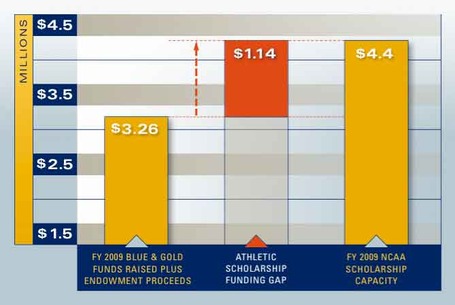 I got nothing else here, other than those numbers don't take into account the 24.6 men's and women's lacrosse scholarships that Marquette is allowed to start handing out this school year. If you want to argue with me on this point, take it up with Joe True instead. You should probably take your checkbook with you, though.

No person in the United States shall, on the basis of sex, be excluded from participation in, be denied the benefits of, or be subjected to discrimination under any education program or activity receiving Federal financial assistance.

A recipient which operates or sponsors interscholastic, intercollegiate, club or intramural athletics shall provide equal athletic opportunity for members of both sexes.

To put it in layman's terms, in order for Marquette to offer the maximum allowable 85 football scholarships and still receive any kind of federal financial assistance, they're going to have to either A) create enough women's sports to match it or B) eliminate enough men's sports to balance the scales. Since being a member of Division 1 requires Marquette to have seven (7) men's and seven (7) women's sports, option B is out. If I take the numbers from the graph in Part 2 and do some math, that means MU's going to have to come up with another $6+ million a year to cover the new 170 scholarships.

I don't want to hear "BUT ANDY! People will donate to fund the football team!" No. They won't. They don't donate the extra $1.14 million needed so Terri Mitchell can have the allowed 15 scholarship players instead of the 11 she has for this season, and they're not going to come up with this money either. It's worth remembering that the $6 million is just covering the cost of the students going to school. It doesn't cover their coaches, training staffs, travel, or upkeep on the multitude of facilities that are going to have to be built to allow for locker rooms and competition for all these new women's sports.

So there it is, people. Three reasons why Marquette's not getting a football team and why it would be a fool's errand to do so. Case closed. Shut it down. If you want to try to make a case in the comments, go ahead. I guarantee that you're going to get pantsed in the process.