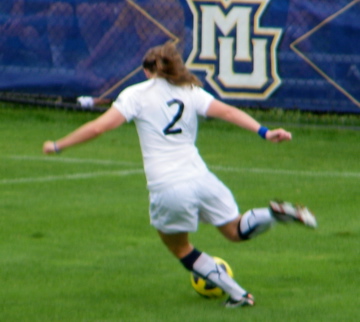 #2 Mady Vicker makes a strong play on the ball.

The weekend opened early for Marquette as the women's soccer team took on DePaul down at Valley Fields. The scoring got started early for Marquette yet again when - you guessed it - Maegan Kelly chipped in a Kate Reigel pass in the 6th minute to give the Golden Eagles the quick lead. From there, Marquette dominated the rest of the 1st half, generating 6 more shots to finish with 9 for the half while holding DePaul without a shot at all until the 42nd minute. DePaul was able to break through Marquette's defenses in the 71st minute when Morgan Celaya put one past Natalie Kulla on the near post. MU managed to get four more shots off in regulation but couldn't convert them, including a header from freshman Mady Vicker that hit the crossbar in the 89th minute to provide some foreshadowing.

DePaul got the first two shots of OT, including a Rachel Pitman header that went off the post, before Marquette took control of the match. In the 98th minute, Britney Scott found an unmarked Mady Vicker outside the 18 yard box. Vicker advanced into the box before beating keeper Megan Pyrz to the near post for the golden goal and Vicker's first career goal. Marquette moves to 9-2 (2-1) on the season, and 14-0-0 all time when Maegan Kelly scores a goal.

The #14/#15 women's soccer team returns to action on Sunday afternoon at Valley Fields when they host defending national champion #20/#24 Notre Dame. The Irish enter the match 4-4-2 on the season and 1-1-1 in Big East play. Before they lost to Louisville in their BE opener, Notre Dame had reeled off 62 straight regular season Big East contests without a loss since 2005, when the last team to beat them was YOUR Marquette Golden Eagles. The Irish will be looking to rebound from a 1-1 against South Florida in Tampa on Thursday night. The Marquette fan wearing the craziest Marquette outfit to the 1pm match will be declared the "True Fanatic" at halftime and will win a $100 gift card to the Marquette Spirit Shop and a Marquette Fat Head.

Men's soccer (2-4-1) gets the first crack by a Marquette team at one of the Traitorous Two with a match at Syracuse (2-4) tonight at 6pm Central. The match can be heard streaming on WMUR here. The match will be the Big East opener for both teams and is Marquette's first trip to upstate New York in six years. 5 players have combined for Syracuse's 7 goals on the season and keeper Phil Boerger has played every minute for the Orange, posting a 1.46 GAA with a save percentage of .727.

A home contest against South Florida (5-8) will be the Big East season opener for Marquette's women's volleyball team (9-4). The match will have live streaming video from the Al McGuire Center here. The Bulls are led by Valerie El Houssine's 3.38 kills/set and Shelby Dailey's 9.09 assists/set. USF opened their Big East schedule last night with a win over Syracuse. The Bulls had to rally from a 0-2 deficit to win the last three sets for the win, including two 29-27 wins in the third and fourth sets.