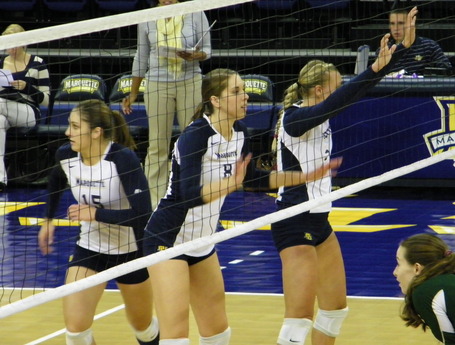 #15 Courtney Mrotek, #8 Danielle Carlson, and #5 Ashley Beyer get ready for Marquette to serve.

The big news from the weekend was the #14/#15 Marquette women's soccer team picking up their third win over a ranked opponent, this time a 3-2 overtime victory against #20/#24 and defending national champion Notre Dame. Marquette's quick strike offense was on display on all three goals that they scored. Ashley Stemmeler got the scoring started just 30 seconds into the match when Lisa Philbin drew ND keeper Maddie Fox off her line with a cross near the net, leaving Stemmeler with all the space in the world. The score stayed 1-0 MU until Melissa Henderson lived up to her preseason Offensive Player Of The Year billing in the 63rd minute, dribbling around a defender and beating Natalie Kulla to register the equalizer. But that just kick started MU's offense again. Just 3 minutes later, Katie Hishmeh corralled a bounding ball off a Maegan Kelly corner kick and found Kelly racing towards the net. Kelly launched a shot that Fox couldn't put a complete stop on, and Marquette retook the lead while Kelly retied Henderson for the Big East lead in goals scored.

That wasn't enough to put the defending national champions away, though. Jessica Schuveiller fired a 30 yarder in the 72nd minute that snuck past Kulla's outstretched arms to even things for the second time. The Marquette offense went back into high gear, recording 6 shots in the last 18 minutes compared to just 1 for Notre Dame. These were high quality shots for the Golden Eagles, as Fox was forced to make 4 saves down the stretch to force overtime. But those would be the last saves Fox would record for the game. Notre Dame got the ball to start overtime, but Marquette forced an immediate turnover, with Kelly and Mady Vicker pushing downfield immediately before Taylor Madigan fired a shot at the top corner of the net. Fox got a glove on it, but it wasn't enough to stop Madigan's shot from turning into the golden goal just 18 seconds into overtime.

After the jump: More winning!

The Marquette men's soccer team got things off to a great start on Saturday night with a 3-2 over win over the traitorous Syracuse Orange. Syracuse got on the board first when MU keeper David Check couldn't put a clean stop on a Mark Brode attack, but C. Nortey continued his outstanding freshman campaign when he evened the score in the 26th minute with his 4th goal of the season, a header off on a Calum Mallace free kick. Syracuse came right back 6 minutes into the 2nd half with a Lars Muller goal, but the Golden Eagles would not go away. Chris Madsen made the best use of his team low 17 minutes when he turned a Bryan Ciesiulka pass into the equalizer in the 65th minute. From there, the play was fast and fierce. Syracuse registered 5 shots in the next 23 minutes compared with 6 for Marquette. Marquette's next shot was their last of the match, and for good reason. Eric Pothast attempted a header 88th minute which didn't go in, but the stray ball was cleaned off the line by Marquette's own C. Nortey to give Marquette their first lead of the game and the only one they would need. The win gives Marquette consecutive wins for the first time this season, which is a perfect way to be headed into a road match on Wednesday against our hated rival, the Wisconsin Badgers.

While the women's soccer team was beating Notre Dame at Valley Fields, the women's volleyball team was hard at work at the Al McGuire Center against South Florida, coming away with the 3-1 (25-17, 23-25, 25-19, 25-17) victory. As pointed out yesterday afternoon, Ashley Beyer and Danielle Carlson were killing it for Marquette, recording 16 and 15 kills respectively in the match. Beyer also had 18 digs in the match for her 4th double-double this season, while Carlson led the team in hitting percentage at .600. Chelsea Heier kept her Big East lead in assists per set, recording 53 in this match.