Skip to main content
On To The Title Match! VB sweeps UConn in Big East semifinals

It turns out merely disagreeing with a referee in soccer is enough to earn you a red card. This was the case last night in Marquette's men's match with Wisconsin. After a first half where Marquette managed to take a 1-0 lead on a Eric Pothast header in the 35th minute despite Wisconsin controlling the play for the most part, Marquette was called for 4 fouls and issued two yellow cards in the first 17 minutes of the 2nd half. It would appear that coach Louis Bennett had seen enough and disagreed with the referee so strongly that he was issued first a yellow card and then a red card at 63:06 for what the referee clarified after the match as "dissent."

Seriously? You can get a red card for "dissent"? Dictionary.com defines dissent when used as a noun as "difference of sentiment or opinion." Hoo boy. I'm guessing Buzz should be thrilled that this ref isn't a Big East basketball referee in his free time.

After 4 more fouls for Marquette (compared to 1 for the Buckys) and a yellow card for assistant coach Steve Anderson, Wisconsin was allowed to start shoving Marquette around to the point where AJ Cochran registered the equalizer in the 81st minute, heading in a Tomislav Zadro corner kick. In overtime, Marquette was able to get two solid shots on net, but UW keeper Max Jentsch made the save on both. The second overtime called on MU keeper David Check to hold the line. Check needed to save two of UW's 4 shots and his skills forced Blake Succa to push his shot with 9 seconds left too far to the side where it hit the post to preserve the 1-1 draw.

The second half foul differential: 9 called on Marquette and 2 on Wisconsin. This coming after a first half foul count of 8 on UW and 7 on MU and 2 overtime periods where a grand total of 2 fouls were called. Anything seem strange about this to you?

Sheesh. On the upside, we now have an official AE Nickname for Coach Bennett. From this point on, he will be referred to as Louis "The Dissident" Bennett.

Moving on to women's volleyball, the team starts a 3 game weekend road trip tonight at Sacred Heart (11-4, 2-0). The Pioneers are coming off of 2 wins in NEC conference play after winning the regular season and conference tournament titles a year ago. They've been powered to a 5-0 record at home this season by outside hitter Kimmee Roleder's 3.51 kills/set and they have two setters, Megan Pullone and Alisa Mesa, who are averaging over 5.25 assists/set. Live stats for the match can be found here and live video can be found for free here.

After the jump: A Big East Standings update for the three fall sports we've been covering here!

The following standings charts are taken directly from BigEast.org, so any math mistakes are all Pitt's fault. 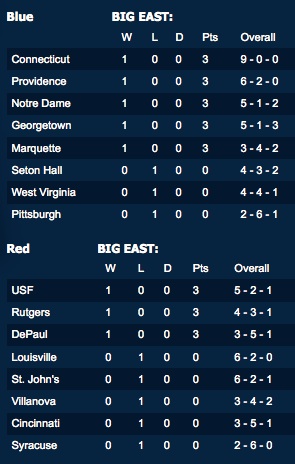 It's worth noting that Connecticut has allowed just two goals all season en route to that 9-0-0 start. Next up: Women's soccer: 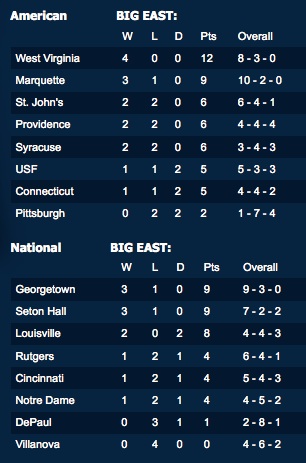 We'll have to start keeping an eye on West Virginia's activity, as they are responsible for Marquette's lone conference loss. Finally, women's volleyball: 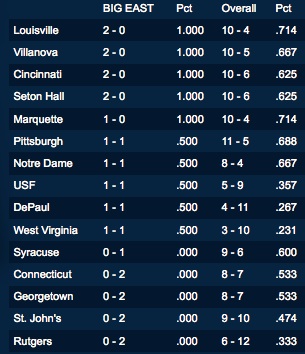 It's still early, so Marquette still plays every team in the conference other than USF... hey, wait a minute. MU only has 13 conference matches left. That means they only have 14 total, so .... 14, 15. Yep, not everyone plays women's volleyball. And it turns out that the culprit is Providence, who does actually have a women's volleyball team, but they inexplicably play in the America East conference, and according to Wikipedia, that's the only sport they compete in that conference for. WEIRD.