Share All sharing options for: 9.5.11 Weekend Recap: Now With Pictures 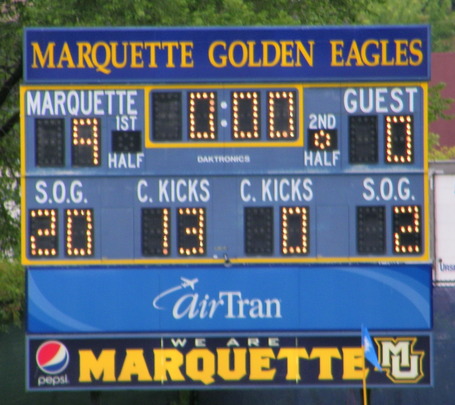 #11/#12 women's soccer took their first road trip of the season and first loss of the season on Friday night with a 3-1 loss against #7/#10 Florida State. The Seminoles' Tori Huster first put Marquette in a 1-0 hole in the 8th minute, registering her second goal of the season. Marquette took their first deficit of the season in stride, generating 4 shots through the rest of the first half and only allowing 1 for FSU. They took that momentum into the 2nd half, and it paid off quickly, with Britney Scott finding the back of the net to even the score in the 49th minute. From there, Marquette and FSU traded pairs of shots before FSU's Jessica Price found the upper right corner in the 65th minute to give the Seminoles the lead for good. Marquette surged forward for the remainder in an attempt to even the score again, but their 3 shots never found their way past FSU keeper Kelsey Wys and Janice Cayman buried one from 30 yards out in the 90th minute to ice the win for the Seminoles. Marquette had the advantage in shots, 12-6, but could never take advantage of the pressure.

Unfortunately for North Dakota's women's team, this meant that Marquette had some frustration to work out on Sunday afternoon. Maegan Kelly scored for MU 63 seconds in and the rout was on. 6 different Golden Eagles scored goals and Kelly tied a program record for goals (4) and points (10) in a match en route to the 9-0 win seen in the picture above. After three rapid fire goals on consecutive shots by Kelly, Kate Reigel and Kelly again in the 14th, 15th and 17th minutes gave MU a 4-0 lead, coach Markus Roeders started the substitution parade, leading to 24 Golden Eagles seeing playing time, with no one going longer than Haley Fritzlen's 74 minutes off the bench. Keeper Natalie Kulla made 2 saves in her 45 minutes of action to secure her 45th career win and Marquette's defense and overpowering offense kept things simple for Sofie Schunk in the 2nd half by not even allowing North Dakota to get a shot off.

After the jump: Men's soccer at the Panther Invitational and volleyball at the Bluejay Invitational!

The men's soccer team had the same record as the women's team for the weekend, but they took a much different path to get there. On Friday against Western Michigan, MU's Adam Lysak took a page from 3 of the women's team's wins and gave his team an early lead with a header goal off a Bryan Ciesiulka free kick. The Golden Eagles held that lead through the half until C. Nortey flipped a shot over WMU keeper Matt Murrell's head in the 60th minute. It looked like Marquette might hold on from there, but WMU was awarded penalty kicks in 64th and 87th minutes and Shane Lyons beat MU keeper David Check on both of them to force overtime. Marquette and WMU traded shots in the first OT to lead to a 2nd 10 bonus minutes. In the 2nd OT, WMU had shots from Jason Grant and Joel Del Toro 4 seconds apart in the 104th minute go wide and off the crossbar respectively. Those would be the last shots WMU got in. With 20 seconds left in the game, Ciesiulka had his corner kick deflected back at him to give him a 2nd chance at playing the ball towards the net. His cross found Andy Huftalin's head, and the ball found the back of the net for the golden goal and Huftalin's first career goal.

While Marquette benefited from last second heroics on Friday, they were victimized by it on Sunday. After Western Illinois was forced to play a man down after Hilary Esangbedo was ejected for a 2 legged tackle on Kelmend Islami in the 84th minute of a 0-0 game, Daniel Lewis played an Alexis Dominguez pass past Check with 32 seconds remaining in regulation to give WIU the win over Marquette. Marquette had a 20-13 advantage in shots for the game, including 13 of those in the 2nd half alone, but couldn't convert any of their chances into goals. Injury news for Marquette got worse during the game when freshman defender Axel Sjoberg left in the 15th minute with a foot injury and did not return. Sjoberg joins Calum Mallace and Michael Alfano on the shelf for MU.

The women's volleyball team went 2-1 at the Bluejay Invitational over the weekend with wins over South Dakota and Creighton bookending a loss to Northern Illinois. Ciara Jones led the way on Friday against South Dakota with 19 kills, propelling MU to the 3-1 (25-12, 19-25, 25-13, 25-21) victory. Danielle Carlson chipped in 15 kills and freshman setter Chelsea Heier posted the highest assist total by any Big East player this season with 50. Heier was all over the floor for MU, recording 5 digs, 3 serves for aces, and 2 blocks in the match.

Saturday's first match with Northern Illinois provided even more high water marks for the Golden Eagles. Heier broke her brand new career high assist total with 56 and Julie Jeziorowski tallied 31 digs for her career best, beating out the 30 she had against Seton Hall last season. But the best MU performer of the match was senior Ashley Beyer, posted a career best 18 kills to go along with a career best and Bluejay Invitational record seven service aces. But all of these outstanding efforts went to waste as Northern Illinois defeated Marquette 3-1 (27-29, 25-23, 25-23, 26-24).

In their finale to the Bluejay Invitational, Marquette was a poor houseguest, beating Creighton 3-0 (25-18, 25-19, 25-20) on their home floor. Jones was the team leader in kills again with 11, with Carlson and Courtney Mrotek finishing a close second with 10 apiece. Both Jones and Carlson finished the weekend with all-tournament team honors. The Golden Eagles head into their first home match of the season on Friday with a 4-3 record.