Share All sharing options for: Marquette! UW-Milwaukee! LIVE ON FOX!

Fox Soccer Channel, that is. 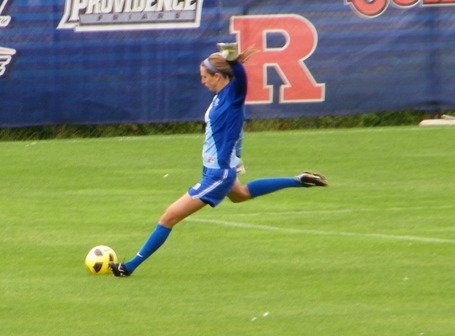 Tonight at 7pm, the #12/#12 Marquette women's soccer team plays their second road game against a ranked opponent in less than a week in a match with #14/#14 UW-Milwaukee at UWM's Englemann Stadium. The game will be televised live on Fox Soccer Channel as the NSCAA Game Of The Week with Dean Linke and Sari Rose on the call.

The match will be the 20th all time between the cross town rivals, with UWM carrying a slight 7-6-6 advantage. Of the previous 19 contests, seven have required extra time to decide a finish, including last year's 1-1 double overtime draw, and nine have had just one goal be the difference between the two sides.

UWM enters the game undefeated with a 6-0 record with their most recent wins coming over Iowa State and Minnesota en route to the Minnesota Gold Classic title. Sarah Hagen leads the Panthers with seven goals on the season, with three of them coming as the game winner.

Marquette looks to use their offensive momentum from Sunday's 9-0 win over North Dakota to carry them to their first road win of the season. Maegan Kelly's 4 goals and 2 assists in the match helped propel her to two weekly honors, TopDrawerSoccer's Team of the Week & the Big East Weekly Honor Roll.