Share All sharing options for: GOOOOOOOAAAAAAAAL! #12 Marquette over #14 UW-Milwaukee 1-0! 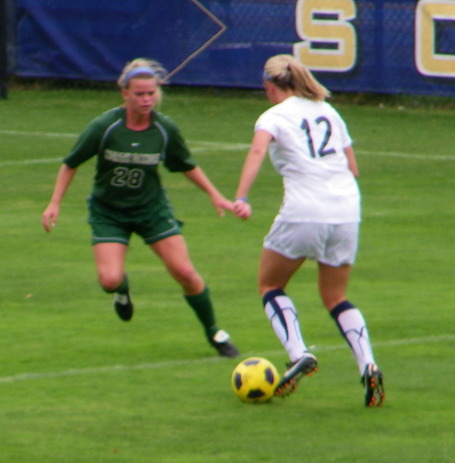 #12 Lindsey Page sets up to attack the net.

2200+ people in attendance? You bet. National TV broadcast on Fox Soccer Channel? Sure thing. But it was Marquette vs. UW-Milwaukee in a women's soccer match, so like it had seven times out of the 19 previous matches, overtime was necessary to bring this to a conclusion, and like 9 of their other 19 matches, this go-round between the Golden Eagles and the Panthers had a margin of victory of just 1 goal.

In this case, that one golden goal came off the foot of Marquette sophomore Maegan Kelly, lifting MU to a 1-0 double overtime victory on the road at Englemann Stadium. In a reversal of Sunday's match against North Dakota, where Kelly scored just 63 seconds in, this time she had to wait until there were just 69 seconds remaining until full time before she was able to chip a Lindsey Page pass past UWM keeper Jamie Forbes from the top of the 18 yard box.

As has been the case this season, Marquette had numerous chances to score in the game, registering 19 shots in the game, and they were largely putting them on net, forcing Forbes to make 10 saves. UWM needed every single one of those saves, as Marquette controlled the game on both sides, only allowing the Panthers to take 6 shots in the 109 minutes of action. Keeper Natalie Kulla wasn't tested until UWM's 5th shot of the match, which came in the 104th minute. That lone save was all Kulla needed to earn her 35th career shutout, 5th most in NCAA history.

After the jump: A quick roundup of other MU sports happenings!

If you'd like to win a Marquette scarf and a ticket to what College Soccer News recognized as one of the 10 best college soccer rivalries in America in Friday night's men's match between UWM & Marquette, then be sure to follow the men's soccer team on their Twitter account @marquettesoccer, or on Facebook at facebook.com/marquettesoccer starting at noon today. You can find more details here.

Natalie Kulla was featured in an article on NCAA.com.

Led by Blake Johnson and Peter Bolgert going 1-2 in the race, the Marquette men's cross country team brought home the team title from the Crusader Cup over the weekend.