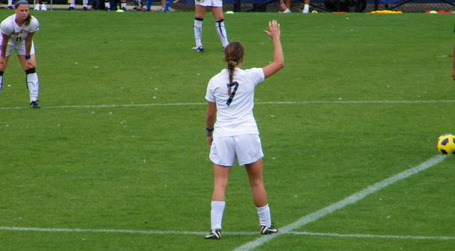 Men's soccer returns to the site of the games they split last weekend to finish their road trip with a match against UW-Milwaukee tonight at 7:30pm at Engelmann Stadium. UWM comes into the annual Milwaukee Cup game with a record of 2-1 on the year and they bring the Milwaukee Cup with them, having defeated MU 4-2 last year at Valley Fields. You can listen to the streaming WMUR call of the game here.

The Golden Eagles will follow that match up with their home opener on Sunday afternoon at 2pm against Wright State. The Raiders carry a 3-1 record on the season, with their only loss coming against #21 Kentucky, and they will inexplicably play Northeastern at Engelmann Stadium tonight before the MU-UWM game.

The women's volleyball team kicks off their home schedule with two matches today and one tomorrow. The Marquette/Milwaukee Invitational gets underway at 1pm today at the Al McGuire Center with a match against Southern Mississippi. Those Golden Eagles have started the season 3-3 after winning all three matches in their own invitational before dropping all three in the Iowa State Tournament. Junior outside hitter Halie Ecker leads USM with 79 kills. Everyone attending the Southern Miss game gets a free ticket to Marquette's second match of the day against Akron.

The Akron Zips are 3-4 on the season, courtesy of 3 straight wins in their own invitational event. They'll be coming off a match against UW-Milwaukee earlier in the day and have three players with over 50 kills on the season already. In between sets 2 and 3 of the Akron match, there will be a Welcome Back party for MU students, which naturally includes every college student's favorite: Free Food. Both of these matches will be streamed live and for free on GoMarquette.com, as will any other untelevised home matches for the rest of the season.

As the event name hinted at, the volleyball team will wrap up the weekend by traveling over to the Klotsche Center to take on the Panthers of UWM on Saturday night at 7pm. The Panthers enter the weekend 5-2 and are led by senior outside hitter Kerri Schuh's 109 kills on the season.

Women's soccer has some time off after their big win over UWM before they play the back end of their 2 game road trip on Sunday afternoon. They'll travel down to Bloomington to take on Indiana. The Hoosiers are 3-2-1 on the season heading into their match with Xavier this evening. Orianica Velasquez and Lisa Nouanesengsy lead the attack for Indiana with 4 goals apiece on the season.