The Golden Eagles beat the Huskies 3-1 at the Al McGuire Center. Although there were several outstanding plays by the players, the star of the match may have been head coach Bond Shymansky. Since Marquette reached its Dig Pink fundraising goal, Shymansky (seen below during a time out) donned the student section's blue and gold bibs. He was nearly upstaged by the Golden Eagle mascot who also wore the overalls. 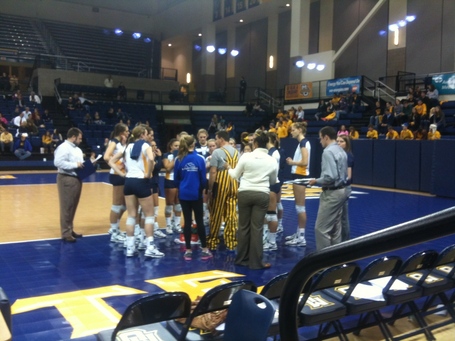 In the first set, Marquette found itself in an early hole that was a much as five points: the team was down 14-17 when Shymansky called for timeout. They were able to tie it up at 18 on an Elizabeth Koberstein setter kill and then three consecutive kills by Danielle Carlson gave them the lead for good Marquette claimed the set, 25-21.

The Golden Eagles then jumped out to a 6-1 lead before the Huskies called timeout to regroup: the break didn't stem the tide as the Marquette lead grew to 22-11 before Shymansky rotated in Casey Read and Mary Nilles for starters Lindsey Gosh and Koberstein. UConn was able to score 4 unanswered points on the new lineup, but their rally was shut down quickly and Marquette closed out the set for a 25-17 win.

The third set started out a close affair with neither team able to building more than 2 point lead. However, down 10-12, UConn took a timeout and came out roaring: the Huskies went on a 8-1 tear before the Golden Eagles were forced to call timeout themselves. Marquette attempted to come back, but came up short, only getting as close as 4 before dropping the set 19-25. UConn's success was short-lived: although it was close early, the Golden Eagles never allowed a Husky lead in the final set. UConn was losing 3-6 by its first time out and the gap had grown to 6-13 by the time they used their last. Marquette took the set 25-15 for the 3-1 victory.