Didn't realize you could win awards for Badger Hate Week, did you?

We'll start with an honorable mention to a late entrant: McCormick Hall. Marquette held a residence hall desk decorating contest for Beat Bucky Badger Hate Week, and the freshman residence hall came through with a bang. 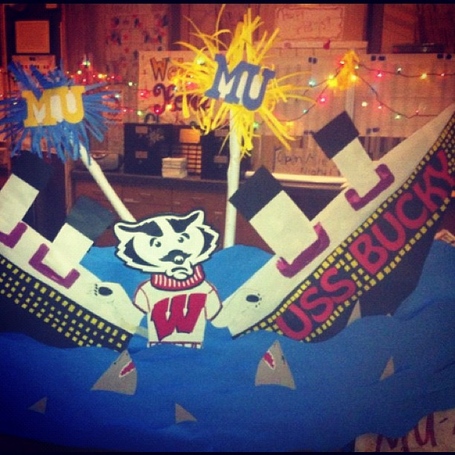 I think the sharks are a nice touch.

The big winner for the Badger Hate Week Service Award goes to loyal reader MUKate08. Kate discovered back in July that she's been fighting the good fight against the Badgers for longer than she realized:

That's @lj854 wearing a UW cap. Who did I marry? I think I'm going to be sick. #WeAreMarquette twitter.com/mukate08/statu…

You've done outstanding work, Kate. You've erased any trace of Badger interest in another person through sheer force of will. You're a shining beacon to all of us who stand to oppose the Badger way at every turn.

Do you have your own story of service in the name of Badger Hate Week? Share it in the comments section!