Who Do You Want? BYU vs Iona Edition

Share All sharing options for: Who Do You Want? BYU vs Iona Edition

BYU and Iona play tonight on truTV for the right to play YOUR Marquette Golden Eagles on Thursday afternoon. But who do you want to see win the game? Not who do you think will win, but who presents a better opportunity for Marquette to win?

With the help of our friends at StatSheet.com, we've arranged some numbers. Hit the jump to make an informed decision!

Statsheet.com was nice enough to make a graph to compare the Four Factors when both teams have the ball, so we'll start out with that.

To provide some context for these stats, both teams are ranked in the top 60 in both effective field goal % and turnover percentage, but Iona is noticeably better at both shooting the ball and preventing turnovers, ranking 4th and 25th in the country at both. Things go the other way when it comes to offensive rebounds as BYU is 11th in the country and Iona is middle of the pack at 173rd. Neither team is great at getting to the line, but BYU is merely mediocre (162nd) while Iona is terrible (304th out of 345).

One thing that's not in the chart is their offensive efficiency. Iona's 6th in the country at 115.8 while BYU is 54th at 107.9. Short version: They're both more efficient than Marquette is (107.7), but Iona's WAY better.

On to the defense! StatSheet.com doesn't provide a chart for the defensive Four Factors, but that's what Excel is for! Here you go: 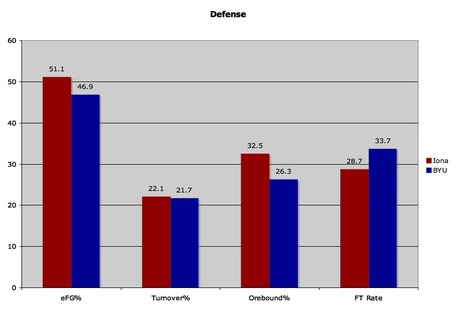 As you can see, BYU's a much better defensive team, with the exception of being more prone to fouling shooters. The good news here is that Iona's a TERRIBLE defensive team, so BYU is only better by comparison. That 51.1% eFG for the Gaels? 264th in the country. BYU's much better 46.9% is only good enough for 91st. Like I said, better, but not great. Unsurprisingly, BYU is just as great as stopping you from getting offensive rebounds as they are at getting their own, ranking 11th in the country on both ends of the floor.

So from what I can see, do we want to see Marquette try to use their defense to shut down Scott Machado and Momo Jones while taking advantage of their porous defense, or do we want to see if Marquette can stop Brandon Davies, Charles Abouo, and Noah Hartsock from rebounding at an elite rate?