Understanding Florida Through Pictures: When Marquette Has The Ball

Share All sharing options for: Understanding Florida Through Pictures: When Marquette Has The Ball

YOUR Marquette Golden Eagles take on the Florida Gators on Thursday where the winner gets a spot in the 2012 NCAA Men's Basketball Championship West Regional Final. We've got some time to kill, so we're going to take a look at how these two teams match up on the floor. We'll start today with how Marquette's offense compares to Florida's defense. With a tip of the hat to Statsheet.com, go ahead and hit the jump! 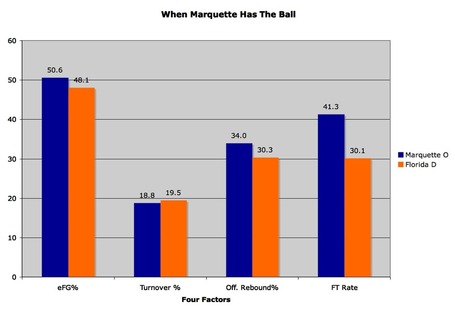 Relative to what Marquette does on offense, Florida holds their opponents to less than that on average. The upside for Marquette is that relative to the rest of the country's numbers, Florida is pretty middle of the road. Statsheet.com has them ranked below the top 100 in all but free throw rate allowed (43rd), and their turnover rate, while forcing more than Marquette usually gives up, is actually 213th in the country.

As far as efficiency goes, Marquette is getting 1.07 points per possession (61st in the country), while Florida allows 0.99 points per possession (131st). If Marquette is going to end up being allowed to operate on offense at essentially the same efficiency that they are used to, this game is going to come down to whether or not Marquette can approach the defensive intensity that they showed on Saturday night against Murray State.