Skip to main content
Sweet 16! VB sweeps Georgia Tech in the 2nd round to advance!

Buzz In Minnesota And What It Means

Share All sharing options for: Buzz In Minnesota And What It Means

Let's flash back to March 20th for a moment, as Arizona State guard and rising senior Trent Lockett received his release from ASU to pursue a transfer in order to be closer to his mother in Minnesota who had been diagnosed with cancer. That brings us to 4 days ago when SNY's Jon Rothstein tweeted this:

When I read that I thought two things: 1) Rothstein was told by a Big East assistant that Darius Johnson-Odom would be preseason player of the year which never happened and 2) I didn't expect to hear anything about this any time soon since Marquette is full up on scholarships for next year.

Which brings us to yesterday....

Noted Paint Toucher Andrei Greska passed along a picture on Twitter from a gent up in Minnesota:

We're all pretty familiar with what Buzz Williams looks like. Here's what Trent Lockett looks like, courtesy of ASU's student media site, StatePress.com: 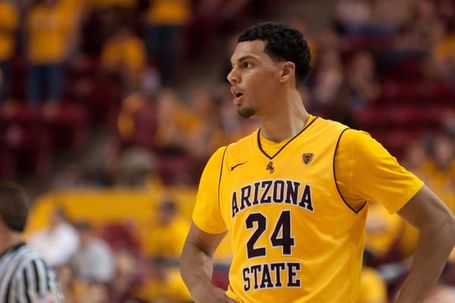 So yeah, that definitely looks like Buzz recruiting Trent Lockett.

First, the good news: Lockett's release brought about this thank you letter from House Of Sparky, SB Nation's ASU blog. The 6'5" guard led the Sun Devils in points, rebounds and steals this past season while finishing second in assists. Lockett was named the Pac 12 All-Academic First Team for the second consecutive year in 2011-12 and was the only All-Academic first teamer to be named to the All-Conference team in 2010-11.

Now the bad news: Buzz putting in the effort to bring in Lockett for one final year tells us that Buzz expects to have an open scholarship by the time school starts in August. This is presuming that the NCAA gives Lockett the go ahead to bypass the traditional transfer redshirt year and play immediately. If the NCAA decides that Milwaukee isn't close enough to Minnesota to justify his immediate eligibility and Lockett would have to sit out the 2012-13 season at Marquette, that's just going to make a huge mess both for Marquette's scholarship situation and more importantly, for Lockett and his family.