So Where Do We Go Now?

Share All sharing options for: So Where Do We Go Now?

Yesterday, the Marquette men's basketball team announced that sophomore forward Jamail Jones had been granted his release to pursue a transfer to a different school. After the release of Aaron Durley from his national letter of intent, this was probably the second least surprising roster move to happen. I was slightly surprised by the timing, as Erik Williams and Yous Mbao's transfers weren't announced until after the semester was finished. Combine the slight change in timing with the simplicity of announcing any transfers at once, and it seems unlikely that we will see any more changes.

That brings us to the big question: Where do we go from here?

Hit the jump for a chart and some speculation! 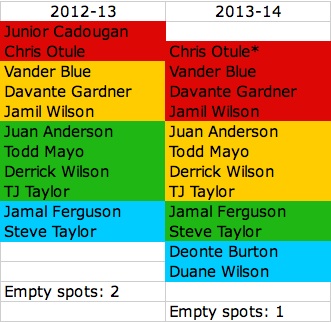 You're all smart people, I don't think I have to provide a color key to explain the classes, other than the asterisk on Chris Otule for 2013-14 notes that he still has to have that sixth year approved by the NCAA.

What we have now is two open spots for this fall, but if Otule is granted his sixth season, only one of them will still be open in the fall of 2013. Who are the likely candidates for these open spots? Here's a by no means complete list:

Tulsa freshman Eric McClellan. McClellan apparently has no interest in playing for new head coach Danny Manning, and according to this, he has a visit scheduled with Marquette.

Class of 2012 forward and Milwaukee native Phillip Nolan. We've discussed Nolan in the past as well.

Class of 2013 recruits and Simeon teammates Kendrick Nunn and Jabari Parker. Marquette is definitely on Nunn's radar. ESPN.com has Parker listed as the top player in the country in their class, so that might be a long shot. However, with Simeon teammate Steve Taylor already coming to MU in the fall, perhaps it's not completely a pipe dream now that there's an open scholarship.

I'm sure there's lots more possibilities. What's your favorite choice for Buzz to spend his scholarships?