On Tuesday, the Big East released the preseason coaches' polls for the upcoming women's soccer season. To no one's surprise, three time defending division champion Marquette was picked to win the American Division, and because it's now a yearly tradition dating back to when they joined the Big East, Notre Dame was picked to win the National Division. Louisville junior Christine Exeter followed up last year's postseason Offensive Player Of The Year award by earning a matching preseason award for this season.

The other two preseason individual awards ended up as a bit of a surprise. Hit the jump, and we'll get into why. 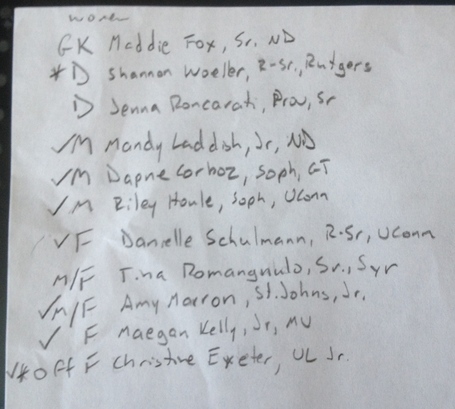 Here's the actual list as released by the Big East:

You'll notice that I actually did pretty well... until it comes to the preseason Defender and Goalkeeper Of The Year Awards. First up is Marquette's Ally Miller being named Preseason Defender Of The Year. Miller is the only returning player with multiple Defender Of The Week awards last year, so I was tempted to go with her, but she was listed as a midfielder on last year's postseason All-Big East Third Team. That's why I went with Rutgers' Shannon Woeller, who was named to the postseason All-Big East Second Team and also went to camp with Team Canada before the London Olympics.

The preseason Goalkeeper Of The Year award is the most confounding to me. Notre Dame's Maddie Fox had the best save percentage in the conference last year, and finished second in goals against average to Marquette's Natalie Kulla, who has since graduated. Fox's team is picked to win their division, yet two keepers from two teams without so much as a first place vote, Syracuse's Brittany Anghel and Villanova's Jami Kranich, were named co-Goalkeeper Of The Year. Neither Anghel nor Kranich finished in the top 10 last year in save percentage nor goals against average, and they didn't even finish in the top 5 in total saves. Heck, they're not even the best returning keeper on the total saves list from last year. That distinction belongs to Cincinnati sophomore Kristina Utley. I don't throw around compliments to Notre Dame athletes lightly, but I have to say this: Maddie Fox got HOSED.