Today's game between Providence and Marquette was brought to a halt repeatedly in the second half because a bat was fascinated by what was happening on the court. Here's PC's Sidiki Johnson avoiding attack, via Gifulmation:

How about video of the players attempting to ensare the bat in a towel, as shot by someone in the upper deck?

How about Providence head coach Ed Cooley, via 30FPS? 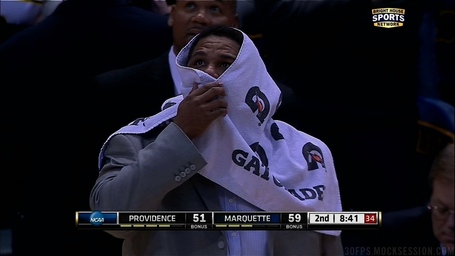 That's not even the best thing that Cooley did, as he took refuge behind one of the referees at one point.

Save the bat!!! If you catch the bat it's an automatic win! #GoldenSnitchprobs twitter.com/MarquetteWLax/…

That was one of the strangest things I've seen in 375 years. #mubb

The bat has money on Providence.