It's yet another kickoff event as we get closer and closer to the start of the season!

For the first time, men's and women's basketball will be having Media Day from the same place on the same day! The men's festivities start off at 8:30 Central, with the women's end of things coming at 12:15 pm. We already know that Buzz Williams took seniors Davante Gardner, Chris Otule, Jake Thomas, and Jamil Wilson with him to New York City. I don't believe I saw anything about anyone traveling with women's head coach Terri Mitchell, but I would expect that Katherine Plouffe made the trip.

I'm going to try to embed the Livestream from the Big East's Media Day Center here. If it doesn't work, you can click through to BigEast.com and check it out from there. 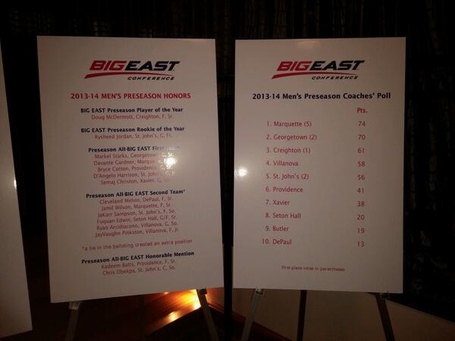 UPDATE! Marquette's women's basketball team has been picked to finish fifth in the Big East, and senior forward Katherine Plouffe has been named to the 10 player preseason all-conference team.

UPDATE! It looks like the live stream is back underway with interviews with Bob Wenzel, although they cut to the "be right back" card while they switch out interviewees.

9:32 am -  Jamil Wilson on the live stream! He says he saw high schoolers at the elite camps he went to over the summer that told him that they were impressed with how hard MU plays.

9:51 am - I will personally give the producer or director of the live stream $5 if they start waiting until Wenzel is set to go with the new interviewee before going back to live mics and live cameras.

10:40 am - Providence head coach Ed Cooley says he's lost 80 pounds. Nice job by him! Also, shout out to the producer/director of the live stream, as they actually jumped into the Cooley interview a second or two late, which is preferable to coming in 15 seconds early.

11:14 am - St. John's head coach says the Big East is the place to be if you have a basketball jones. Is Coach Lav lamenting the move of TBJ to The Starters on NBA TV? Also: What, no Mrs. Coach Lav at media day?

1:21 pm - Back with women's basketball's end of things, I have an update to the women's awards. Junior guard Arlesia Morse is one of three players to pick up a preseason Honorable Mention nod.

1:49 pm - Marquette's own Katie Young gets a crack at an interview on the live stream!

We'll keep this page up to date with any cool or interesting news coming out of New York all day long, so keep checking back! If you see anything that catches your eye, be sure to bring it up in the comments section!