The Golden Eagles swept the Pirates in fairly simple fashion and clinched a spot in the Big East tournament.

A Match In Three Pictures: 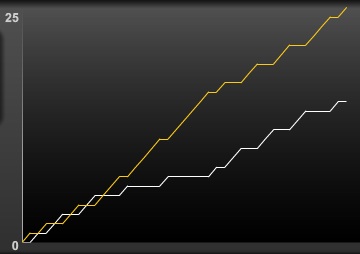 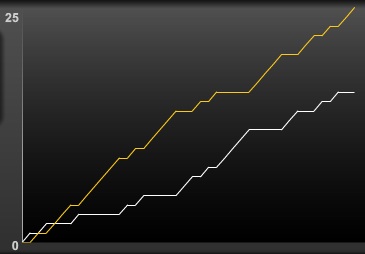 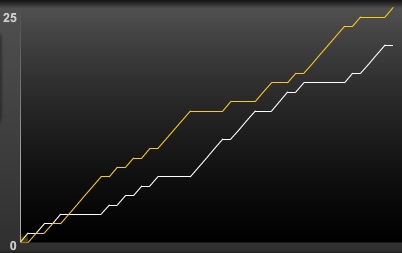 That's grabbed from the GameFlow function on the GameTracker. I could regale you with stories of "Marquette busted out to an early lead and held on from there," but let's be honest, other than that brief flare in the third set where Seton Hall cut the lead to one on three different occasions, it's the exact same story, and you'll get bored.

Marquette got 13 kills from Lindsey Gosh and 12 from Autumn Bailey. Both Bailey and Gosh hit over .440 in the match with only one error between them, so Seton Hall deserves a paddling for not figuring that one out faster. Julie Jeziorowski, who was honored before the match for being the first MU player to reach 2,000 digs in a career, tacked on another 20 to her all time record. Freshman Teal Schnurr had a career high eight blocks. Elizabeth Koberstein recorded 40 assists to average 13.33 per set, which is somehow higher than her 6th best in the country season average.

Seton Hall was led by 11 kills from Stacey Manthorpe and 20 assists from her sister Shelbey. Tessa Fournier and Alyssa Warren both had 15 digs for the Pirates.

With the win, Marquette is the first team in the Big East to clinch a slot in the conference tournament, which will be held over Thanksgiving weekend and hosted by Creighton. The Golden Eagles maintain a two game lead over Creighton and Xavier for first place in the Big East.

Up Next: Marquette will take today off and return to the Al McGuire Center to host St. John's (15-12, 4-7 Big East) on Sunday afternoon at 2pm. The Red Storm are coming off a 3-2 loss to DePaul last night.