With the 2012-'13 season in the rearview mirror, our quest to find THE most hated opponent in recent Marquette history resumes with second-round voting in Uncle Ricky's Porcini Pod.

Share All sharing options for: BASTARD BRACKETOLOGY: Round of 32: Uncle Ricky's Porcini Pod

To that end, we created a bracket with the 48 most reviled Marquette opponents from the last 20 (or so) years. To give things some kind of structure, we divided the brackets into players from MU's Conference USA years and players from MU's Big East years, and then subdivided things into 16-player pods: the Digger Phelps Memorial Pod; the Denny Crum's Combover Pod; Uncle Ricky's Porcini Pod; and Bo Ryan's Zombie Nation Pod.

We've finished the voting for the Round of 48, and the field has been narrowed to 32. We opened the voting last week for the second of the Digger Phelps Memorial Pod, and continued this week with Denny Crum's Combover Pod. Below are the results from the first round of Uncle Ricky's Porcini Pod*, along with the matchups for the next round.

* Since we're on the subject of Uncle Ricky: the next one of you who writes a "how wonderful that Rick Pitino and his family get to celebrate a championship together after years of scandal and strife" gets punched square in the bits. Why? Because the family's been scandalized in the last couple of years BECAUSE OL' PASTA PREMATURA HAD (alarming brief) SEX WITH A WOMAN WHO WASN'T HIS WIFE IN A FREAKING RESTAURANT. You'll forgive me if I'm not getting the warm and fuzzies over this one. 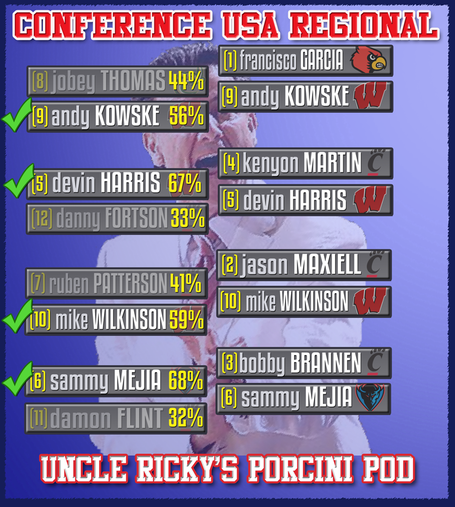