We resume our review of the season by taking a look at how the sophomore guard performed.

With the 2012-13 season now in the books, we take a moment to look back at the performance that each member of YOUR Marquette Golden Eagles turned in this year. While we're at it, we'll also take a look back at our player previews and see how our preseason prognostications stack up with how things actually played out. We'll run through the roster in order of total minutes played (lowest to highest). The series continues today with one of the more challenging players to review, Todd Mayo.

Minimum Expectation: No drop off in his offensive play across the length of the season. Mayo averaged just short of 8 points a game last year, so expecting 10 a game from him this year with no fade out should be pretty easy. From what Buzz said about Mayo's defense last season, I don't know if there's a way for him to improve on that end, so expecting more of the same is a safe bet. Oh, and no more friggin' suspensions.

Wildest Dreams: Mayo starts mixing in rebounding and passing into his game, allowing Buzz to go crazy with the rotations without any drop off on the floor at any of the guard or wing positions.

Worst Nightmare: The 21 year old sophomore has peaked as a player and ends up locked into a sixth man role, coming off the bench for either offensive or defensive reasons.

For those of you who don't remember, Mayo's player preview was posted approximately 8 hours before the university announced that he had made himself academically ineligible. He ended up missing Marquette's first 10 games, and never seemed to really re-earn head coach Buzz Williams' trust. He only hit his freshman year average of minutes per game (21) on four occasions, and the last one of those came on February 6 at South Florida. When he did play, he was all over the map, sometimes making hustle plays like the three-quarters of the court running and diving chase for a loose ball against Syracuse that made me wonder why Jake Thomas was earning playing time over him, and sometimes turning to a black hole where he ended up forcing up a bad shot amongst a season full of shots that didn't fall for him.

The lasting Todd Mayo image of the season for me came on a sequence late in the first half of the NCAA tournament game against Butler. Marquette had an extended possession where the ball kept pinballing around and it ended up in the hands of Mayo. 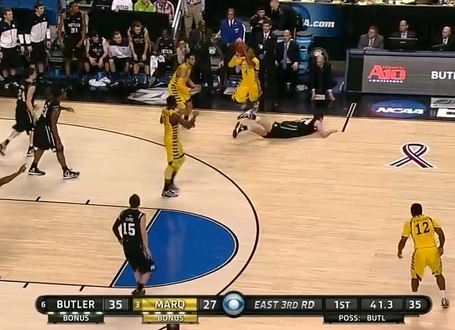 First, Jamil Wilson had just - and I mean "approximately one second earlier" - missed a runner off the front of the rim, so MU can burn the game clock all the way down to 6 seconds left if they want. Second, there are two teammates - Trent Lockett and Derrick Wilson - who are WIDE open and a third, Jamil Wilson, who has defenders behind him who probably can't steal a pass to him. Third, this is a terrible shot from a physical aspect. Mayo's feet aren't set and he ends up releasing the ball more with one hand than with two. Fourth - and this is the important one - ANDREW SMITH DIDN'T FOUL HIM, and even if there was contact, good luck finding a referee on Earth who's going to call minor incidental contact as continuation of all things on a loose ball scramble.

Want to disagree with me about how terrible of a play this was by Mayo? Fine, take it up with Buzz as well, because Mayo sat out the entire second half of this game, all of the Miami game, and didn't come into the Syracuse game until the 8:43 mark of the Syracuse game when Marquette was already down 16-7, had missed nine of their first 11 shots, and Trent Lockett had just picked up his second foul. I'm surprised he didn't go to Jake "Buzz just wanted anyone to hit a shot against Syracuse" Thomas in that circumstance, but it is what it is. Mayo missed 71 straight minutes of action and only got back into a game because the game was rapidly spiraling out of control.

Best Game: I'm going to go with his outing in the Bradley Center against at the time #12 Syracuse. Mayo hit two of his five attempts behind the arc, both of which came in a 15-2 run that gave Marquette the lead for good. He also went 3-4 from the free throw line, and added two assists and a steal.

Season Grade (1 - Worst Nightmare to 10 - Wildest Dreams): I'm giving Mayo's season a 3. He didn't come close to realizing some of the promise of his freshman campaign, and the fact of the matter is he went backwards on his stats on a year to year comparison. Does his decrease in minutes play a part in that? Sure. Is the reason for the decrease in minutes completely his fault and something that was mentioned in the Minimum Expectations? You bet. Can he rebound from this disappointing season and fill the void left by the departing Vander Blue? We'll see.