Putting A Bow On It: The Five Best Moments Of Marquette's Time In The Big East 1.5

Share All sharing options for: Putting A Bow On It: The Five Best Moments Of Marquette's Time In The Big East 1.5

Today is the last day of the Big East sponsoring football as a sport. Tomorrow we kick out the football schools and officially join up with Butler, Creighton, and Xavier in order to form a more perfect union.

There's no better way to commemorate the occasion by looking back at the five best moments that Marquette experienced while a part of this iteration of the conference. The list is completely arbitrary and composed completely by me, so your arguments are valid and welcome in the comments section below. Let's get to it! 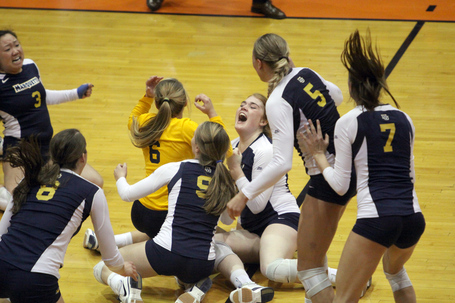 Ok, so the picture's not of the team celebrating just making the tournament. They're celebrating their first ever NCAA tournament win, earned in the program's first ever NCAA tournament match. This was in 2011, and at the time, it was the culmination of everything that head coach Bond Shymansky had been guiding the program towards since taking the reins in December of 2008. The team returned to the NCAA tournament one year later for their second ever appearance, proving that Marquette is a program that has arrived on a nationally relevant stage. 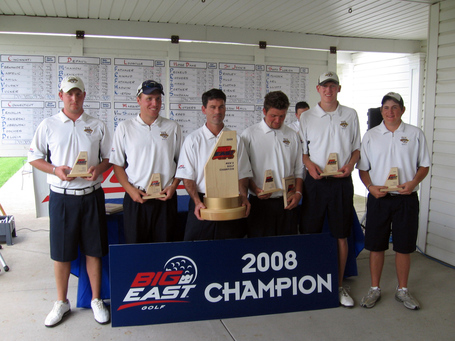 Senior Ted Gray (far left) was the star of the show for Marquette, starting things off with two straight rounds at 4 under par, and eventually finishing with the best individual score in the tournament, beating out St. John's Keegan Bradley - yes, THAT Keegan Bradley - by five strokes. Mike Van Sickle (second from left) finished fourth overall, and Michael Bielawski (third from the right and unaware it's picture time) snagged seventh place to help propel the Golden Eagles to the university's first Big East conference championship in any sport. 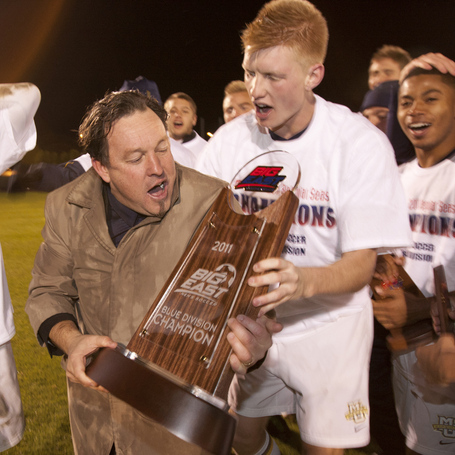 I couldn't differentiate between these two. On one hand, winning the division title is a huge deal, and you can see the excitement on the faces of head coach Louis Bennett and midfielder Calum Mallace in the picture. But due to injuries, most notably to Mallace, the 2011 Big East Midfielder Of The Year, the 2011 squad had a rough go of things in the non-conference schedule and didn't qualify for an at large bid to the 48 team NCAA tournament field. While the team lost Mallace to graduation and leading scorer C. Nortey to injury for the 2012 campaign, they spent most of the season ranked in the top 10 in the country. The Golden Eagles didn't win a second straight division title, but it's hard to do that when three other teams in your division - Connecticut, Georgetown, and Notre Dame - also were hanging around the top 10 all year. Instead, MU made the NCAA tournament for the first time since 1997 and for just the second time in program history. 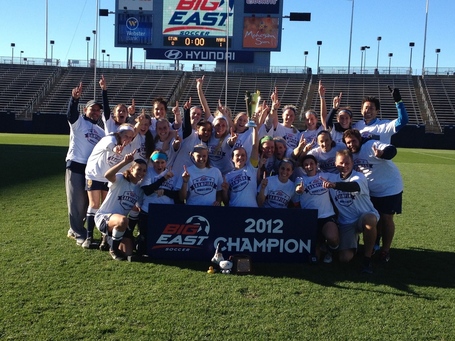 Four straight division titles finally culminated in a tournament title for women's soccer last fall. Georgetown played Marquette to a standstill for 86 minutes before Taylor Madigan found Rachel Sloan wide right. Sloan played it into the box to Madigan who was able to make enough of a first touch to stop Hoya keeper Emma Newins from playing it cleanly. From there, an academic boot from Madigan shook the twine to give the Golden Eagles a 1-0 lead to protect for the last 150 seconds to claim the conference title and the automatic bid to the NCAA tournament.

How about we skip a photo here and go straight to the fan reaction from inside Madison Square Garden as Vander Blue hits a layup as time expires in overtime to beat St. John's and clinch a share of the Big East regular season crown for the first time?