Men's & women's soccer split their weekend between on the road and at home, while volleyball is in Dunk City for a tournament.

Share All sharing options for: 9.13 Weekend Preview: I Miss Having Home Games

After rolling through the competition in the first ever Marquette Invitational, the national polls are responding to MU's bounce back. The women are back in the Soccer America top 25 right at the 25th spot, the NSCAA has moved MU up to 22 up from 25, and Top Drawer Soccer has them holding steady at #18. Taylor Madigan has grabbed the goal scoring lead for the Golden Eagles with four on the season, which is also good enough for the lead amongst humans in the conference. At this point, I believe that Rachel Daly (11G) is a robot sent from the future to score goals. Maegan Kelly's three assists on the season have her just one assist away from tying the all time program record at 32 helpers. The next ball coming off of her boot could be the tying assist, so be sure to keep a close eye on #4!

When: Friday, September 13, at 7pm Central
Where: Valley Fields
Audio/Visual: Live stats will be here.
Special Promotions: Youth Soccer teams in uniform get 2 for 1 admission, faculty/staff get in for free, and the residence hall floor with the most students in attendance wins a pizza party!
Twitter Updates: @MUWomensSoccer

After being picked to finish third, the defending Patriot League champions have come out flying to start the season. All four of their wins have been by shutout, and their only blemish on the season is a 1-0 loss to Syracuse. As befitting her preseason all-league selection, Caroline Brawner is tied for the team lead in goals with two. Eight different Red Raiders have registered at least one assist, with Jenna Panepinto being the only player to help out on two different goals.

Brenna Mason played the first 90 minutes of the season at keeper against New Hampshire, but it's been Erin Cummings that's seen most of the work in the net since then. Cummings has gaudy numbers as could be expected given how Colgate's defense has been. The sophomore from Virginia has a goals-against average of 0.26 and she's stopping 89% of the shots on frame.

When: Sunday, September 15, at 1pm Central
Where: Adelaide Street Field in Normal, IL
Audio/Visual: Video of the match will be streamed by ISU, but it's available by subscription only. It looks like audio will be streamed for free, and live stats will be here.
Twitter Updates: @MUWomensSoccer

When we last saw the Redbirds, Marquette was punching in a 4th minute goal to take an early lead en route to a 3-0 win in the first round of the 2012 NCAA Tournament. Since then, things haven't been super exciting for ISU. They opened the season with a win, but then got outscored 13-2 on a three game trip through the Big Ten, and then split a pair of 2-1 matches on the road against TCU and Texas. The good news is that they were the runaway favorite in the coaches' polling to win the Missouri Valley Conference this year.

Freshman Hannah Leinart has tallied three goals on the season, while preseason all-MVC honoree Rachel Tejada leads the team with three assists. Junior Aryn Newsom has seen the wide majority of the time in net, assembling a 2.89 goals-against average and a save percentage of just .622.

The national polls have not been as kind to the men's side as they have been to the women's side. MU is currently unranked in the eyes of both Soccer American and the NSCAA, but Top Drawer Soccer keeps carrying the torch. TDS had three Marquette players in their preseason top 30, and they've kept the Golden Eagles slotted at #16.

15 men in the Big East have scored two or more goals already this season. Four of those men wear blue and gold, and three of them - Louis Bennett II, Coco Navarro, and Jake Taylor - are all freshmen. Senior Paul Dillon has made good use of all of that goal scoring talent and is currently leading the Big East with three assists. After a rough start to the season with five goals allowed in the first two matches, keeper Charlie Lyon showed some of his 2012 form last weekend, giving up just 1 goal in 180 minutes.

The Wolverines started the season as Top Drawer Soccer's #15 team, and a 5-2 shelling of Loyola-Chicago boosted them up to #14. But since then, they've played two 1-1 ties against Bowling Green (which Marquette beat 3-0 last Friday) and South Florida, who is also 1-0-2 on the season. If you want to give them the benefit of the doubt for the Bowling Green game since it was on the road, that's fair, but the USF game was in Ann Arbor.

Junior TJ VanSlooten has found the back of the net three times to lead Michigan, while Ezekiel Harris and Tyler Arnone have both added two helpers each. Michigan native Adam Grinwis has played every minute in net, racking up a goals-against average of 0.95 and a save percentage of .714 thus far this season.

When: Sunday, September 15, at 3pm Central
Where: Valley Fields
Audio/Visual: Live stats will be here.
Special Promotions: Anyone with a church bulletin from 9/7-9/15 gets in for FREE, and the residence hall floor with the most students attending wins a pizza party!
Twitter Updates: @MarquetteSoccer

While the Wolverines were picked to finish fourth amongst the seven schools that play soccer in the Big Ten out of the 12 member schools, the Spartans were picked to finish second behind defending national champion Indiana. MSU opened the season with two shutout wins over Western Michigan and Oregon State, but followed that up with a home 2-1 loss to Valparaiso. No, seriously. This match will officially be the first road game of the year for Michigan State, as their attempt at playing Detroit was postponed.

2012 All-Big Ten honoree Adam Cope has two of MSU's six goals on the season. Both Ryan Thelen and Ryan Keener have two assists on the season, so it's probably a safe bet to just go ahead and make sure you mark anyone in green named Ryan. Zach Bennett has been in net the whole season for Michigan State, and he has a goals-against average of 0.67 and a save percentage of .667 to show for his efforts.

The 2-2 record doesn't quite tell the story of Marquette's season so far. They lost a squeaker to #13 BYU and got stomped by #3 USC without outside hitter Lindsey Gosh in the lineup. In the meantime, multiple freshman have been getting chances to show what they can do, led by two time Big East Freshman Of The Week Autumn Bailey. Bailey is not only already leading the way for MU's freshmen and the freshmen in the conference, she also holds the best kills average in the Big East at 4.56 per set. Senior setter Elizabeth Koberstein has picked up right where she left off, averaging a Big East leading 11.81 assists/set. Freshman Jackie Kocken has added a new dimension - height- to Marquette's defense, averaging just over a block per set, good enough for eighth best in the conference.

Well, if you want to become a better program, you have to start challenging yourself and seeing how the big kids play. That's what Marquette as they take on perennial national championship contender Penn State in their first match of the (deep breath) Hilton Garden Inn/Homewood Suites Airport Volleyball Classic. It's the second straight Friday with a match against the #3 team in the country, as USC has ascended to take Penn State's spot at the top of the AVCA poll after the Nittany Lions lost 3-2 to Texas last weekend. The three dropped sets to the Longhorns are the only sets they've lost all year. On top of that, they've only allowed their opponent get to 20 points in four of the 13 regulation sets all year. Can't give them credit for defense for dropping the fifth set to Texas 15-10, y'know.

It's hard to get a perfect handle on Penn State's numbers, because they haven't updated their season stats with the win over #8 Florida. In any case, out of the PSU players who have played in all 11 sets that their stat book lists, freshman Paula Prieto Cerame leads the team with 3.36 kills/set and setter Micha Hancock averages 9.91 assists per set. They don't really have a noticeable digs leader from that core that's played all 11 sets, but senior Deja McClendon is averaging 3.8 digs/set while playing in 10 sets.

Ooof, that is not the start to the season that the defending Atlantic Sun regular season champions and preseason pick to win the A-Sun again wanted to see. In their defense, the Eagles were brought in to be the punching bag for #23 Ohio State and #15 Florida State in FSU's Seminole Invitational. Unfortunately, those were just two of FGCU's five 3-0 losses to open the season. They picked up their only win of the season in a punching bag showdown in the Seminole Invitational against Florida A&M, and then dropped a 3-1 loss to in state rival USF.

Senior Kaitlin Holm leads the FGCU attack with 3.22 kills/set, while junior Whitney Masters, the A-Sun preseason Libero Of The Year, anchors the backline with 3.09 digs per set. Junior Gigi Meyer handles the setter position, averaging 9.74 assists in every set.

With a mirror image record, UCA has pretty much had the exact opposite start to a season than FGCU. The Sugar Bears have..... wait. 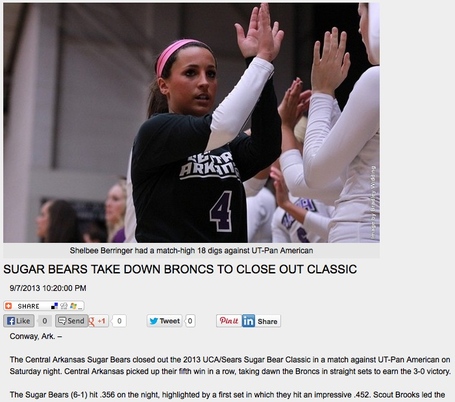 Huh, would you look at that. So I guess they've got this guy as their mascot? Here's where it gets really goofy. Check out their football team page. The football team is just the Bears. Women's basketball? Sugar Bears. What an odd choice to make a distinction for the women's team. Not Lady Bears. Sugar Bears. I'd write a letter to Bret Bielema in an effort to help me understand Arkansas better, but he'd probably just get distracted by the Post cereal reference and go on a sugar binge.

ANYWAY, UCA picked up a big win in their first match of the year, knocking off #20 Kansas 3-1 as part of the Arizona Invitational. They dropped their next match to the hosting Arizona Wildcats, but have reeled off five straight wins. Four of those came in their own Sugar Bear Classic, dropping just one set in the process.

Sophomore Heather Schnars leads the UCA attack with 3.33 kills/set, but she's just one of four Sugar Bears averaging more than 2 kills in each set. Junior Shelbee Berringer averages nearly four and a half digs per set, and senior Marissa Collins is a passing machine at more than 12 assists per set.