It's the 22nd all time meeting between the crosstown rivals.

When: Monday, September 23, at 7pm
Where: Engelmann Stadium on the UWM campus
Audio/Visual: The Horizon League is awesome as always, and they'll be streaming the TWC Sports 32 broadcast. Not that the TWC Sports broadcast will be live. Instead, they're showing a REPLAY of a HIGH SCHOOL volleyball match. If you'd like to watch this soccer match on TV, well, you'll wait til tomorrow night at 7pm, apparently. Live stats for the match will be over here.
Twitter Updates: @MUWomensSoccer

Marquette wraps up their non-conference schedule with this contest, and it's been an interesting nine matches. The Golden Eagles have looked fairly stout across the board, even in their losses against both of the ranked opponents that they faced. The only real glitches in the system were the trip to Illinois State, where MU gave up three goals fairly quickly before bouncing in the second half, and Saturday's contest with Louisville, where the Cards scored two late goals to force overtime before MU won on a penalty kick. Upside: resiliance. Downside: Giving up goals in rapid fashion to teams with red bird mascots. Weird, huh?

Taylor Madigan remains your goals leader with four markers on the season, but Maegan Kelly, Mady Vicker, and Mary Luba are right behind her at three each. That's a lot of M names. Kelly is the points leader by way of her four assists on the season. Kelly's next assist will break the women's soccer all time record as well. Amanda Engel has played almost all of the time in net, but her stats don't look that great for a keeper on a 6-3-0 team. She has a goals-against average of 1.44 and Engel is stopping just 65.7% of shots on frame.

As for the Panthers, their record kind of stinks, but they are 2-1-1 in their last four, with the wins coming at Miami (OH) and at.. wait. This can't be serious. UWM has one of their two wins on the season AT ILLINOIS STATE? "Three goals in 29 minutes" Illinois State? Made the 2012 NCAA tournament Illinois State? Seriously? 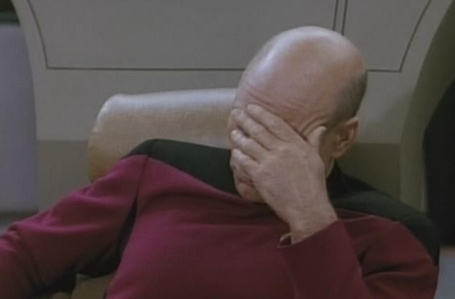 For the first time in 14 years, UWM isn't the preseason pick to win the Horizon League. They did get one first place vote and finished third in the balloting. Junior Krissy Dorre is the goals leader with five, and she's tied for the points lead with fellow junior Kelly Lewers (4G, 3A). Paige Lincicum has seen every minute in net, posting a goals-against average of 2.66 and a save percentage of .609.

(Picard pic via Know Your Meme)