And now, at the suggestion of a reader, we blatantly rip off VU Hoops and start checking in with Buzz Williams' manner of dress for every game.

When this was suggested to me, it seemed like a fantastic idea. Buzz is one of the most uniquely dressed coaches in college basketball. Worst case scenario, it'll lead to a hilarious post on Al's Night every year as we document Buzz dressing like the ugliest overstuffed couch that you can think of.

Given what Buzz went with for New Year's Eve in Omaha, I can't think of a better way to kick this new running feature off. Buzz's lapels don't appear to be shiny like a usual tuxedo, but he's definitely gone with an all black suit and white shirt, which is standard and classic.

But that bowtie, man.

I don't know what it is about it, but it's just not working for him. Is it his body type? Is it his neck size? Is it the red middle and gray bow portion? It's not great. And what's going on with that belt buckle? It almost looks like the old Minnesota North Stars logo.

In the second half, Buzz took his look to a new level by taking off the coat. 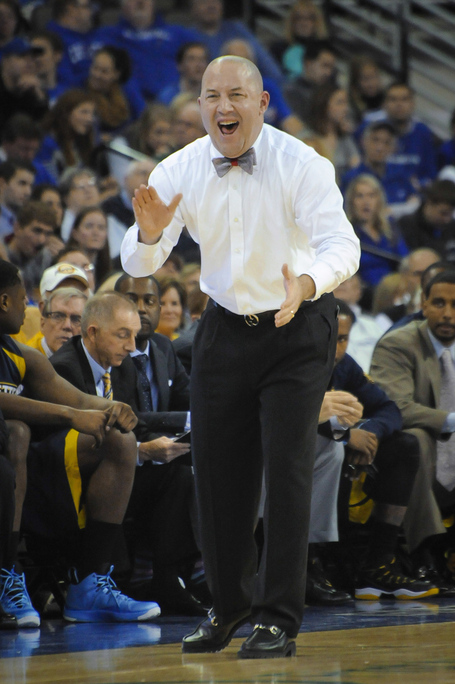 I was watching this game with Rubie Q, and he spent the entire second half making drink orders every time he saw Buzz, as he was pretty sure that Buzz was dressed as a waiter.

All I know is that this sure isn't going to calm down anyone who likes to compare Buzz to Curly from The Three Stooges.