The triumphant return of Style Watch!

After Marquette head coach Buzz Williams broke out a tuxedo and bowtie look on New Year's Eve in Omaha, we debuted Style Watch. Buzz is one of the most uniquely dressed coaches in college basketball, not to mention one of the most photogenic coaches, so it seemed like an easy thing to do for every game.

After going with a Marquette Basketball sweater and slacks look at Butler, Buzz went traditional against Georgetown. A simple black suit, a neat down angle pink and gray striped tie, and pink pocket square to tie it together. Let's take a look at this picture, where Buzz is facing the camera slightly more: 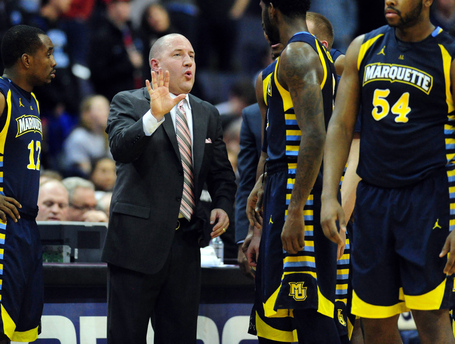 It looks like Buzz is wearing the same belt as on New Year's Eve, making me wonder if it holds some kind of significance for him.

Fingers crossed for Saturday's contest against Villanova and the best dressed coach in the Big East, Jay Wright.

Photo in the body of the article by Evan Habeeb, USA Today Sports