Marquette To Wear Pink Uniforms For Saturday's Game Against Villanova

Share All sharing options for: Marquette To Wear Pink Uniforms For Saturday's Game Against Villanova

No, the big news was how Marquette's going to dress on Saturday afternoon against Villanova: 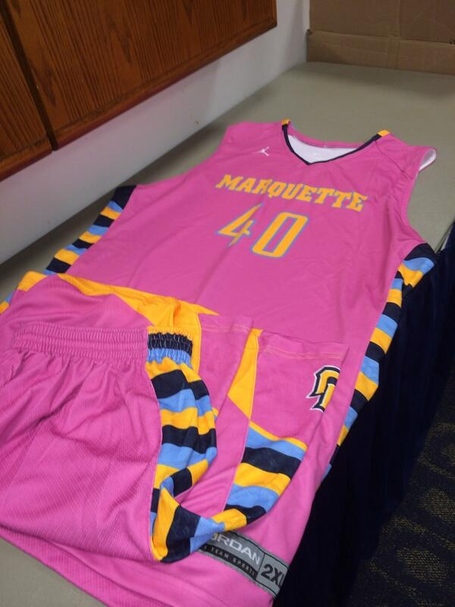 That picture comes to you courtesy of MUTV Sports. I want to share three other tweets with the uniforms in them, because depending on which picture you look at, the color looks slightly different.

Both John Dawson and Jamil Wilson are fans of the new #mubb jerseys that they will wear this weekend vs. Villanova. pic.twitter.com/eTy0Tk0C2i

So, we're going to have to wait until Saturday to see exactly what these look like under the lights of the Bradley Center.

A couple of things that jumped out at me:

Presumably, these jerseys will be auctioned off at some point in the not distant future to help raise money for cancer research, as Marquette did the same thing with the pink women's soccer jerseys from this past season. As far as I'm concerned, as long as you can read the numbers on TV or at a distance, I'm completely okay with these.

UPDATE: Here are the shoes that Marquette will pair with those uniforms.