Time For Fun With Charts And Fouls

I promised, and now I deliver.

Share All sharing options for: Time For Fun With Charts And Fouls

Last night, in Marquette's game against #11 Creighton, there was a combined 52 personal fouls whistled. 21 of them came in the first half, 31 came in the second half.

When there were 17 fouls whistled in the first 10 minutes of the second half, it definitely seemed that something had changed about how the game was being officiated. Let's take a look at two charts to see how out of whack things may have gotten. 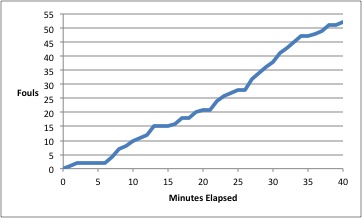 This chart is showing the total number of fouls called in the game as the game progressed. I'm just making this in Excel, so I just counted how many fouls there were at the end of each minute of the game. Given that large flat area at the start of the game, I can't help but think that something changed somewhere along the way. It's hard to believe that there were so few fouls committed early when there were so many fouls being called later in the game.

This chart does end up with a mostly smooth line to the top right corner, but think about this: If both teams end up in the double bonus in both halves, that's 40 fouls for the game. This game passed that point at about the 30 minute mark.

Let's display the data in a slightly different format. 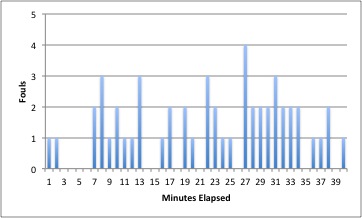 Here we're seeing each minute of the game and how many fouls were whistled during that 60 second period. Compare the section from minutes 27 through 34, where there were 19 fouls called, to the rest of the game, when the fouls were sporadic. It's the referees' job to set the tone early in the game so the players know how the game is going to be refereed, and then maintain that standard for the remainder of the contest.