Skip to main content
Sweet 16! VB sweeps Georgia Tech in the 2nd round to advance!

Here's What Will Stop Marquette From Making The NCAA Tournament

There's one critical trend that will end Marquette's hopes of a ninth consecutive NCAA appearance.

Share All sharing options for: Here's What Will Stop Marquette From Making The NCAA Tournament

It's that time of year, where a man's fancy turns to the Ratings Percentage Index, or the RPI if you prefer the standard acronym. I know people are paying attention to where any one of a dozen bracketologists are dropping their cut lines.

But as far as Marquette's faint NCAA tournament hopes go, there's one thing that threatens to ruin them. It's not their #56 overall ranking on KenPom.com this morning, although that's definitely not helping. It's also not their 73rd ranked offense on the KenPom charts.

It is, however, the 64th ranked defense. Specifically one part of what makes up Marquette's defensive rating, and even more specifically, how that one part is trending lately.

The most important part of efficiency, either offensive or defensive, is effective field goal percentage, or eFG%. It's a simple metric that gives your made field goals total a half point bonus for every three point basket made. After all, shooting 3/6 from two feet away from the basket yields six points, just like shooting 2/6 from behind the arc does. Your ability to make shots or stop your opponent from making shots is roughly 50% of your efficiency rating, and that's the way it should be. "Making shots" is a core principle of basketball.

I've noticed a disturbing trend in Marquette's defensive eFG% over the last few games while putting together the Four Factors breakdowns, and I wanted to dig deeper on it. Here's a chart that shows five game rolling averages for Marquette's defensive eFG% this season. Showing the rolling averages instead of each individual game gives you a better idea of how the trend is going, as it smooths out any sudden outliers in the data, like, say, Creighton shooting 75.6%. 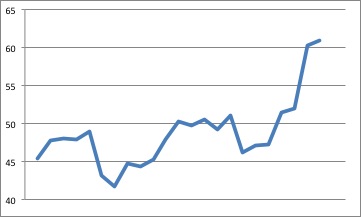 I wanted to make sure I explained that using rolling averages smooths out any outliers before you saw the chart, and now you understand why. Over Marquette's last four games, the defensive eFG% has gone through the roof, with DePaul's 57.1% being Marquette's "best" effort. The Creighton game is only affecting the last two data points: the one right at 60%, and the very end of the line. Does it make for a very dramatic jump? Sure, and trading a 34.5% effort against Providence for the Creighton game is definitely not helping. But if Marquette had four average games (49% right now) to go along with it, the rolling number would be just a shade over 54%, not over 60%. Look at the chart again ignoring where it goes past 55% at the end and tell me that you feel happy with how things have been going lately. Can't do it, right?

This chart is going to get worse before it gets better. Marquette's only defensive performance under 50% in the last six games - a 48% eFG% against Butler - is still in the average on that last data point, but it won't be following the Georgetown game on Thursday. If five of the last six games are any indication, Marquette's not going to hold Georgetown under 48% and cause that graph to start dipping downwards.

The overall point is this: Marquette's ability to shoot the ball can only be described as erratic as best. If this trend of allowing teams to shoot lights out continues, Marquette is not going to be able to keep up. They weren't able to keep up with DePaul on Saturday afternoon (56.7% to 57.1%), and from a preliminary look at the Four Factors, I'm not sure how they won that game.

Marquette is not going to survive a shooting contest with Georgetown, Providence, Villanova, or St. John's, but in order to jump from 11 spots out of the field into a spot at Dayton in the First Four, they're going to have to find a way to defeat all four of those teams. Can they find a defensive mixture that will get them those wins? The trend of the month of February so far has to provide even the strident Marquette fan with doubt.