Did Deonte Burton Need To Sit For Defensive Reasons Against Xavier?

Buzz said that was the case. Did benching Burton improve Marquette's defense?

Share All sharing options for: Did Deonte Burton Need To Sit For Defensive Reasons Against Xavier?

We all know Marquette lost to Xavier last night. We also all know that Deonte Burton went OFF in his third career start, scoring 23 points on 9-14 shooting, as well as grabbing three rebounds and snaring a steal. We also know that Burton only played 10 minutes in the second half, to the befuddlement of most people wearing blue & gold.

Given his night in the 24 minutes that he did play, his minutes in the second half came up at head coach Buzz Williams' post game press conference.

Buzz was asked in the postgame presser if Burton sitting the last 7 minutes had to do with defense. His answer was a simple, "yes" #mubb

Now, Gruman wasn't there, and only reading a transcript, so let's not give him static for not asking a follow up question. I know there's a school of thought that when a coach is that curt with a response that there's no reason to ask him to elaborate, but as far as I'm concerned, that's the EXACT reason why you ask a follow up question there. MAKE HIM not answer the question further.

So, without any further explanation from Buzz, we're stuck to look at the box score and see how the scoring in the game actually broke down. We've got the time Burton entered the game, the score at the time, the time he checked out, the score at the time, the change while he was on the floor, and Marquette's plus/minus for the stretch. Marquette's point total is always the one on the left.

Marquette finished the game +3 with Deonte Burton on the floor. So that means that the question is how did Marquette perform without him on the floor?

This is just pure plus/minus. Did Xavier's offense get more efficient with Burton on the floor? It's possible. But it's also possible that Marquette's offense was an unrelenting force with Burton out there and that balanced out any flaws on the defensive end.

Remember when we discussed Marquette's struggles with effective field goal percentage defense, and I said that it was the one thing that would stop Marquette from making the NCAA tournament? Here's what that five game rolling average chart looks like after last night's Xavier game. 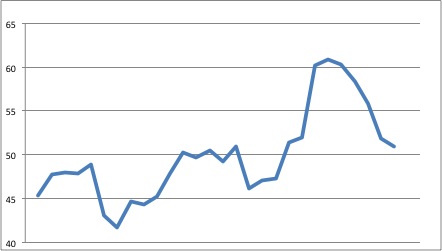 And now, here's the same chart, but now with a rolling five game average of Deonte Burton's minutes in red. 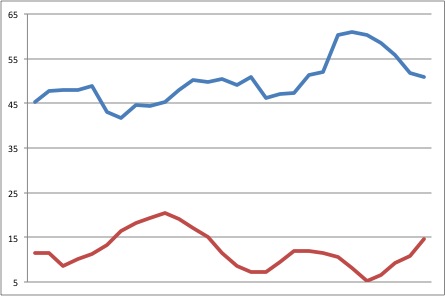 I don't know everything about basketball, and this might be jumping to conclusions, but I have a hard time saying that Deonte Burton has been bad for Marquette's defense over the last four games.