It looks like some footie players across the pond are stealing some ideas from Al McGuire...

If you buy something from an SB Nation link, Vox Media may earn a commission. See our ethics statement.

This past week, our SB Nation overlords put out this tweet:

Someone tweeted that Arsenal's Lukas Podolski couldn’t hit a barn door… and was right! http://t.co/sLli6X7F6S pic.twitter.com/Smb6aRiufy

If you click the link, you'll come to a video of various Arsenal players responding to mean, yet obviously overexaggerated things said about them on Twitter.  While amusing (especially the call back to the milk gag), I can't help but feel that I've seen this bit done before.... 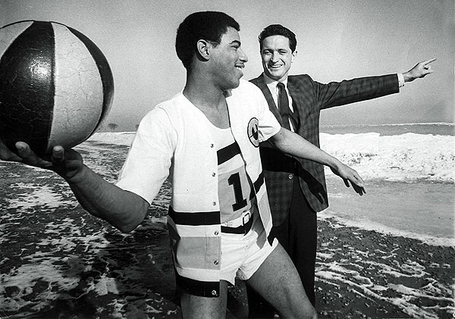 Ah, yes.  Back in 1968, Marquette's Pat Smith got himself into a scrape with DePaul star Bob Zoretich during a game.  Zoretich was much more important to the Blue Demons' play than Smith was to Marquette's, but both players were ejected for the scuffle.  This led DePaul head coach Ray Meyer to vociferously complain that he had lost his star, but Al McGuire had only lost a player "who couldn't throw a ball in the ocean if he were standing on the beach."

So of course the only logical recourse was to gather up a photographer and head down to Lake Michigan where Smith easily hucked a basketball into the Great Lake and McGuire bragged about how much more difficult the shot was because the lake was so much smaller than the ocean.

It's one of the great Al McGuire stories, and if you're going to steal ideas, you may as well steal from one of the best.

Have you seen a Marquette related tweet that you'd like to see in this spot in the future? Let us know on Twitter or send the direct URL link to anon.eagle@gmail.com and be sure to send your Twitter tag along with it so we can give you credit for finding it!