We've got a long summer ahead of us, and a new shiny object to look at in the Gavitt Tipoff Games.

Marquette has a varying history with the members of the Big Ten.  They have a long running series with Wisconsin, of course, and there are a few other schools that MU has squared off with over the years.  With the announcement of the Gavitt Tipoff Games and at least six games against Big East opponents, we're going to check in on Marquette's history against each of the 13 teams and see what could make for the most interesting matchups.

For lack of any particular order of importance, we'll go in order of how many times Marquette has seen each particular opponent.  That means that we have to start with Maryland.

Yep, that's right.  Somehow, the Golden Eagles have never played the Terrapins.  I guess it's not actually that surprising.  Marquette only has played Rutgers when they were a member of the Big East, and there's only been 13 combined games Nebraska and Penn State, the western and third most eastern members of the league.  A wide majority of these games that we'll be seeing in these articles date back to Marquette's independent days in the 1970s and 80s, and it wasn't really worth traveling to Maryland for a game when there were closer quality opponents, and the same goes in reverse for the Terrapins.  On top of that, Maryland had an ACC schedule to worry about in January and February, so it limited their interest in traversing across half the country in a time when travel wasn't quite as fun.

Maryland is 59-43 in three seasons under Mark Turgeon since the former Texas A&M coach took over for Terrapins legend Gary Williams.  I would like to think that he'll still be the coach in 2015 when the Gavitt Tipoff Games start, but his squads are 23-29 in ACC play over that time.  It's hard to extrapolate how that will translate to the Big Ten starting this coming season, of course, but it's not like the B1G is littered with a bunch of pushovers either.

The Terps play their home games at the Comcast Center, an on campus arena that seats 17,950.  With that said, Maryland only averaged 12,557 in attendance across their 16 home games this past season.

If nothing else, it could be a fun contest of who's got the most interesting uniforms.  Obviously, Marquette is regarded as one of the most dynamic uniform setups in college basketball.  But with Under Armour sponsoring Maryland (UA's founder is a Terrapin grad), we can only guess as to what they'll be wearing in upcoming seasons. 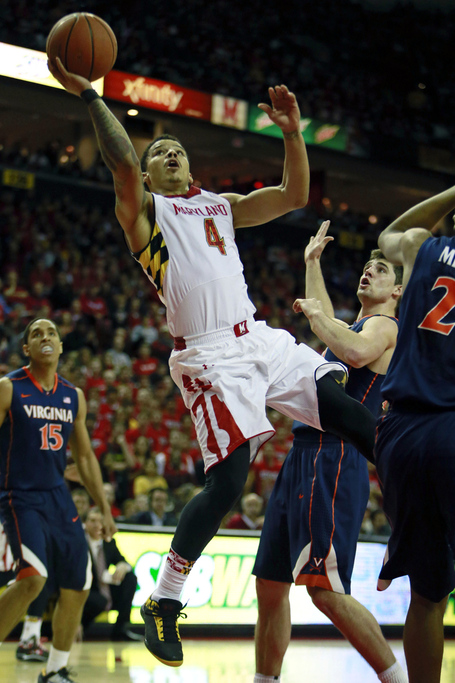 Here we have a picture of Maryland's Seth Allen in a home game this past season, courtesy of Mitch Stringer and USA Today Sports.  You can see the yellow and black checkerboard pattern under his arm, as well as the red and white cross on the side of his shorts.  Both patterns are taken from the Maryland state flag.  Under Armour has been more than happy to experiment with the state flag on the Terps' football unis, so it's only a matter of time before they get more creative with basketball as well.