We're backkkkkkk. Join us in our second attempt to find THE most hated player in recent Marquette history.

Around this time last year, inspired by Grantland's magnificent attempt to identify the most hated college basketball player from the last 30 years, Joe McCann, Dan Maciejewski and I endeavored to create a similar, single-elimination tournament to find THE most hated opposing player in Marquette's recent history. To that end, we created a bracket with the 48 most reviled Marquette opponents from the last 20 (or so) years.

We managed to get through two rounds of voting before a couple of problems torpedoed the whole thing. The first was my fault: not realizing how popular AE is with the young'ins, I didn't provide any info about the players included in the brackets other than their names, so the folks who started following Marquette in the last couple years had no idea why (for example) they should hate Donald Little or Jobey Thomas. The second, as is often the case, was the fault of Louisville fans, who flooded the ballot box to vote for UofL players. When Eric Devendorf was getting run out of the gym by Edgar Sosa, we knew we had to make some changes.

So: changes we've made. We've now included brief summaries of all of the jerkfaces included in the brackets. More importantly, we've now confined the players from the four overrepresented schools -- Louisville, Cincinnati, Notre Dame, and Wisconsin -- to particular brackets. (I also reserve the right to award myself 100 votes should shenanigans transpire in the future.) 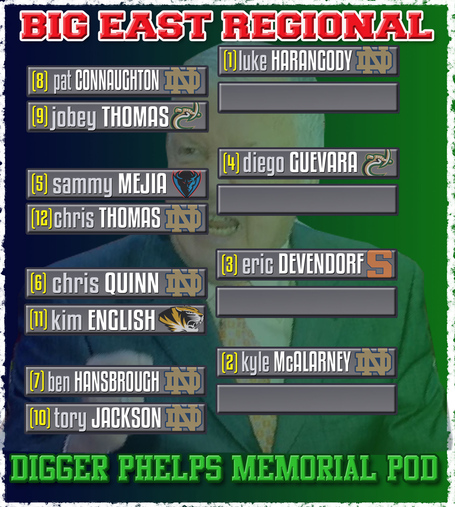 And now, the Hate:
Ah, Pat Connaughton, the latest in the long line of Domers who haven't discovered the joys of apricot scrub. Anyway: two brief, true stories about why Pat Connaughton's on this list, neither of which is related to hygiene: a couple of years back, Marquette got blitzed in the Joyce Center (with Connaughton leading the way with 23 points and 11 rebounds). Our own Warrior Brad was in attendance and reported that Connaughton was standing courtside after the game, signing shirts and hats and shit for ND fans. Apparently, there were a few MU faithful lingering around their seats, and young Pat (very loudly) asked if they'd like his autograph, too. (It's weird that people don't like Notre Dame alums, isn't it? So weird.)

Story Two: when Dan, Joe, and I were originally sorting out these brackets a year ago, Connaughton's name wasn't on the list. I suggested he be considered, and that very night, Marquette got smoked by ND in the Big East Tournament and Connaughton hit like 14 3-pointers. I blame myself. I'm very sorry.

Most of you are probably too young to remember Jobey Thomas, who starred for UNC-Charlotte and Coach Bobby Lutz (RHYMES WITH PUTZ!) around the turn of the millenium, but dude was as aggravating as any of the sharpshooting honkies that Notre Dame or Wisconsin have run out over the last 20 years. His name? Aggravating. (I'm just glad that he finished playing before Arrested Development started, because I wouldn't have found Gob Bluth nearly as funny if Jobey Thomas was still in my life.) His team's nickname? Aggravating. (Wikipedia says something about Charlotte adopting "49ers" because the school was almost closed but was saved in 1949 and something something I fell asleep. I don't care.) His game? Aggravating. He was the kind of cat who could do one thing, and only one thing, and everybody knew he could only do one thing, and we still let him do that one thing 5 or 6 times a game. Blech. I want to go spit now.

If we had done a separate bracket for Guys Who Stuck Around Long Enough To Get A Doctorate, Sammy Mejia probably would've been a one seed. That guy was at DePaul for-EV-er, back when DePaul wasn't the basketball equivalent of a tipped-over Port-o-Let that it's become in the last five years. Back then, before Ol' Gil had taken the helm and worked his magic, the Demons were an occasional pain in the ass, and Mejia was the main reason why. His best performance against MU came in January 2005, when Marquette had snuck back into the Top 25 and had the look of a team that was figuring things out at the right time, and then Sammy Mejia goes off for 26 points and obliterates anyone and everyone we throw at him and DePaul blows us off the court and we end up going 5-10 the rest of the way and lose to Western Michigan at home in the NIT. Those were the bad times.

Hey, speaking of guys who were around forever: if memory (and Google) serves, Chris Thomas started his college career in 2001-'02, the same year that Dwyane Wade first stepped on the court for Marquette. And yet: I swear to God he was playing against Dom James and Wes Matthews and was at Notre Dame for the first five or six years Marquette was in the Big East. But no, says Google, Marquette only played Thomas' Irish twice, and that first go-round wasn't at all pleasant, as freshman Thomas erupted for 32 points, hit 5 threes, and handed out 10 assists as ND throttled Marquette by 21 in South Bend.
When we did the Brackets last year, we had former Domers Chris Quinn and Colin Falls square off in the first round, largely because I can't tell them apart and had to stop myself from conflating them into "Colin Quinn" at least six times. In this iteration of the Brackets, we ditched Falls and kept Quinn because ... I don't know. We just did. It's probably because Colin Quinn Falls looks like an illustration from The Hobbit come to life. He also did that annoying "Notre Dame freshman who comes out of nowhere and bites us in the ass" thing that Chris Thomas started and Luke Harangody perfected, scoring 12 points and making a bunch of 3s against Marquette in 2002.
In the waning years of the Tom Crean Era and the first couple seasons of Buzz Williams' tenure, the NCAA Tournament nearly killed me. We'll get to Jean Felix and the Brothers Lopii and the meltdown against Washington (eventually), but the one that stung me the most was Marquette's loss to Missouri in the second round in 2009. We had all the ingredients for THE perfect ending for seniors Dom James, Jerel McNeal, and Wes Matthews: Dom was unexpectedly back from what was supposed to be a season-ending broken foot, and 'Rel and Wes were at the top of their games, and FINALLY the 3 Amigos were going to get to the Sweet 16 and shut up the morons who called their four years a disappointment because MU never got out of the first weekend of the Dance. And then, with the game tied at 79 and 5 seconds to play, this chickenshit jerk named J.T. Tiller faked an injury after getting fouled, and this other jerk named Kim English got to shoot Tiller's free throws and made them both, and then Tiller IMMEDIATELY ran to the scorer's bench to check back into the game, and then the NCAA changed its rules so the OPPOSING coach gets to pick who shoots the free throws when somebody's too afraid/injured to take the shots himself. I'm getting angry. Let's move on.
To Ben Hansbrough? Jesus, ANOTHER one of these asshat Domers who minored in the very popular "have a career night that makes Rubie bite his pillow and steal a victory from Marquette" field of study at ND. Hansbrough -- less-than-affectionately known as Widdle Brudder around here, owing to his relation to former UNC sociopath Tyler Hansbrough -- took his turn at bat in 2011, when he hit everything he threw up in the second half to wipe out a 12-point Marquette lead and Notre Dame won by 5. Myself, though, I like to think that there was some karmic payback for that performance when Marquette curbstomped ND by 22 the same year, and blew the game open in the first half after Hansbrough tried to take two free throws when his teammate Eric Atkins had been fouled. (What's that? That game happened before the loss in South Bend? Eh, close enough.)
Luke Harangody was a monstrous pain in the ass during his reign of terror at Notre Dame, but he had an able and aggravating accomplice in point guard Tory Jackson. Everybody remembers Harangody exploding for 22 points and 13 rebounds back in 2007 when Notre Dame erased a huge Marquette lead and won going away in South Bend, but MU still wins that game if not for Jackson, who had a career-high 21 in the same game. I am now entirely sick of writing about all the Notre Dame guys who had once-in-a-lifetime performances against Marquette. I'm taking a shower. Goodbye.
The poll is below. Y'all are smart enough to figure out you need to vote for one player in each of the matchups, right? In case you're not smart enough: vote for one guy in the (8) vs (9) matchup, one in the (5) vs (12), and so on. Cool? Happy voting.