Marquette has a varying history with the members of the Big Ten.  They have a long running series with Wisconsin, of course, and there are a few other schools that MU has squared off with over the years.  With the announcement of the Gavitt Tipoff Games and at least six games against Big East opponents, we're going to check in on Marquette's history against each of the 13 teams and see what could make for the most interesting matchups.

For lack of any particular order of importance, we'll go in order of how many times Marquette has seen each particular opponent.  This week, we turn our attention to a team with nine games against Marquette and an all too familiar head coach.

When the Big East and Big Ten officially announced the Gavitt Tipoff Games, we added a poll to our post with the details of the arrangements.  We asked you, our loyal readers, which B1G team you most wanted to see Marquette play, and the poll tilted in one significant direction: Indiana.  The Hoosiers got 34% of the votes, which was as much as second place Michigan State (20%) and third place Michigan (14%) combined.  There's really just one reason for this, as far as I can tell. 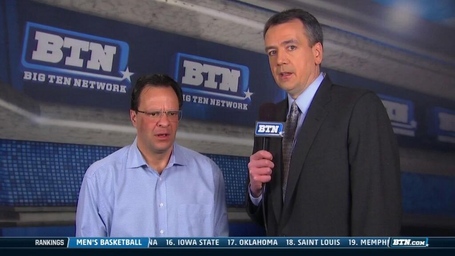 Crean has been the head coach of the Hoosiers ever since he bailed out on the senior seasons for Dominic James, Jerel McNeal, Wesley Matthews, and Dwight Burke.  He's gone 101-97 in Bloomington with just three seasons over .500 and two postseason appearances to show for his six seasons.  Now, it's slightly unfair to be critical of his first three seasons, as he was taking over a program decimated by Kelvin Sampson's NCAA violations.  It is, however, completely fair to be critical of his coaching in late game situations like this:

Indiana was the number 1 team in the country at the time, and all they had to do to force overtime was MAKE CODY ZELLER STAY PERFECTLY STILL IN THE MIDDLE OF THE LANE, and somehow Crean forgot to defend the entirety of the lane in a tie ball game with the inbounds coming from the corner.  If you want an explanation of how that Indiana squad became the first team ever to have two of the top 5 picks in the NBA Draft and not make the Final Four, there's your reason.  Yes, they played like crap against Syracuse, too, but blatant brainfarts like the one in against Illinois had a lot more to do with the overall problem there.

The last meeting between these two schools came back in 2001, when MU snuck out a one point win over #20 IU in the semifinals of the Great Alaska Shootout.  Hey, remember when the Great Alaska Shootout was a thing?  Dwyane Wade scored the winning basket with 11 seconds left, but the play wasn't drawn up for the sophomore in just his fourth collegiate game.  From the GoMarquette.com recap:

"Get the ball to (Oluoma) Nnamaka to take it up strong and everyone support him," was the way Wade described the instructions as the Golden Eagles inbounded the ball with 21 seconds to go and Marquette trailing 49-48.

In the frenzy of activity in the lane, Jared Jeffries stripped the ball from Nnamaka. But Wade snagged it in heavy traffic and put it in with 11 seconds left.

An errant Tom Coverdale pass on the ensuing play gave MU just their second win in the all-time series with the Hoosiers.  Before that, Indiana had won five straight dating back to 1946.  The two teams played just once in the 1980s and only two times in the 1970s.  Before the contest in 1973, you had to go back to January of 1949 to find a game between MU and IU.  The first game in the series came all the way back in 1922, where the visiting Hoosiers prevailed with a 20-17 victory.  Somewhere, Bo Ryan weeps for joy.

The two games in the 1970s both came in the NCAA tournament, and both games pitted Bob Knight against Al McGuire.  The Hoosiers came away with wins in both circumstances.  In the 1973 Sweet 16, Indiana came away with a 75-69 win.  Both teams took the other guys' notable names out of play, as Maurice Lucas and Quinn Buckner only combined to score 16 points.  Marquette couldn't contain Steve Downing, who tallied 29 points for the Hoosiers in the win.  Knight's Hoosiers came away victorious in the 1976 Elite Eight by a final margin of 65-56.  Earl Tatum had 22 points and six rebounds, but the Warriors couldn't match the three headed monster of Buckner, Kent Benson, and Scott May.  That IU trio combined for 42 points and 20 rebounds, and went on to win the NCAA title and remain the last team to ever go unbeaten for an entire season.

Indiana plays their home games at Assembly Hall in Bloomington, Indiana.  One thing you can say for the Hoosier faithful is that they're reliable.  Assembly Hall has a capacity of 17,472 in its current layout, and Indiana averaged 17,358 people per game in the 2013-14 season.  Less reliable is Assembly Hall itself.  Back in February, a huge metal beam fell from the ceiling and completely wiped out one chair and damaged several others.  You can say a lot of things about the Bradley Center, but at least it's not trying to actively murder anyone that's in the building.