A flurry of late goals propels the Golden Eagles to victory over the Ramblers in their season home opener.

For seventy plus minutes at Valley Fields on Friday night, it felt as if a Marquette goal was just around the corner.  Despite the scoreless tie and Coach Markus Roeders trotting out several new faces in relief, the Golden Eagles clearly were in control of the match.

But as the Milwaukee fog started to lift, the Ramblers nearly played spoiler in the seventy fifth minute.  After a turnover on a Mary Luba pass, the Marquette defense found itself out of position.  Goalkeeper Amanda Engel turned away the initial Loyola shot, but wasn't able to keep the ball.  The Ramblers' Katie Grall pounced on the loose ball, but a diving save by Engel preserved the tie.  Minutes later the visitors nearly capitalized off a free kick when the ball dribbled away from Engel's hands, but the Marquette defense cleared the ball out before any damage could be done.

The Golden Eagles offense finally broke through as Mady Vicker found Ashley Handwork in front of the box.  The elder Handwork's header redirected the ball just past Monica Gonyo and gave the Golden Eagles the lead with ten minutes to play.  An insurance goal came in the last minute as Darian Powell beat the charging Gonyo to the ball to put it into the upper 90.  Powell, who missed all of last season with injuries, wasn't satisfied with scoring her first collegiate goal and buried another pass from Liz Bartels in the net to make it a 3-0 win.  For video of the three goals and crazy finish, check out MUTube.

Marquette out shot Loyola 15-1.  Powell accounted for 5 of those shots alone and will henceforth be referred to as The Kraken around these parts.  Engel was credited with one save en route to her first clean sheet of this season.

The fog may have made it an interesting night with a slicker field and ball.  Visibility never reached the point where the ladies could not see each other, but I'm sure defending when it was at its thickest (below) was not fun. 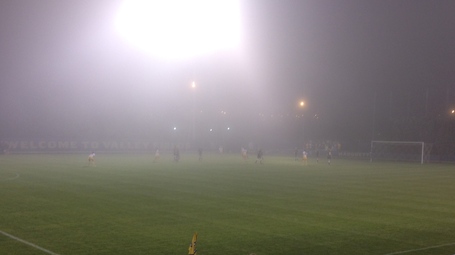 Up next: Marquette takes on Northwestern in its second match of the Marquette Invitational at 4:30 pm tomorrow.  Head to the Valley early to see Loyola-Chicago and Fairleigh-Dickinson at 11:00 am or catch the Marquette men in an exhibition match against Wright State at 1:30pm.