A coaching search can be a dizzying experience. To lean into that sensation, we've once again put together our never-imitated, never-duplicated WHEEL OF COACHIN' as your definitive guide to who should be the hire for YOUR Marquette Golden Eagles men's basketball team. 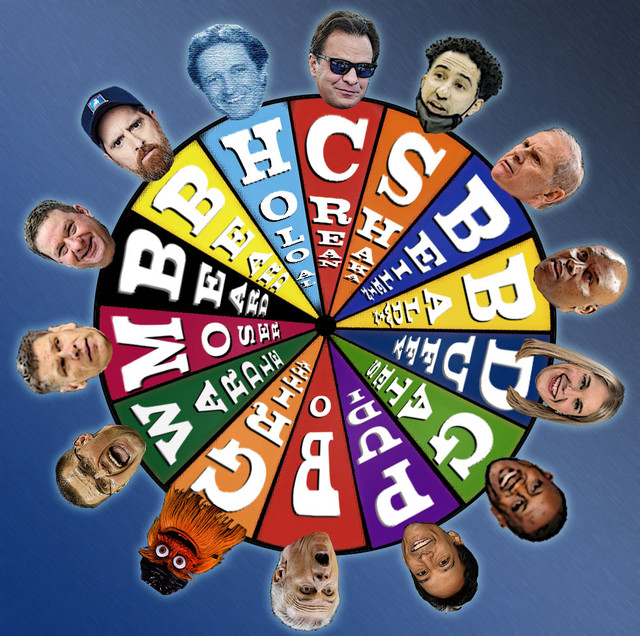 Let's take a spin and see where we land, shall we?

One of Coach McGuire's treasured quotes is: "A team should be an extension of a coach's personality. My teams were surly, obnoxious, and arrogant." It's a great line, and I'm loathe to change it, but -- what if we added HOLOGRAPHIC to that list of attributes? It probably wouldn't help with the turnover problem we've seen in recent years -- hard to hold the ball if you don't have corporeal form -- but we'd commit way less fouls.

Listen: he's said some things. We've said some things. And we could spend the next five paragraphs dissecting when the right age is to stop kissing your children on the mouth in public, or who taught you to tie your necktie such that it sits five inches below your belt, or what would possess you to tuck your polo into your size XXL gym shorts, but here's the rub: we were both really young when we got together the first time, and maybe we didn't have our priorities straight then. But, almost 15 years after he left Marquette, we know what we want: a man who's had a taste of the big time and now has a better sense of his place in the world; page after page after page of breathtaking Google image results; and a Harbaugh in every office in the McGuire Center. #BringTanTomHome

I know, I know: at this point, it's very clear that Shaka wasn't ever going to come here in 2014, that we were just a leverage ploy while he waited for one of the great college basketball jobs to open, and that we weren't nearly skeptical enough when some folks who should've known better got out over their skis with the #DoneDeal nonsense. And, yes, when Jeff Goodman mentioned Shaka as a potential candidate right after Wojo got canned, the obvious reason was: Shaka's due for an extension at Texas and the boosters are getting antsy about his lack of success in March, and we're being set up as a leverage ploy all over again. But that's my head talking, and I'm going to go with what my heart says.

True, he doesn't have experience coaching basketball at any level, but he learned the Xs and Os of soccer on a single transatlantic flight, so I'm pretty confident there's no sport that's out of bounds into touch for Coach Beard. Plus: he's got roots in the Midwest AND a championship pedigree -- ILLINOIS STATE CHAMPS, BABY.

I don't really have anything interesting to say here, so just a note for you grammar-philes: when you're referring to more than one Coach Beard, it's Coaches Beard, like Attorneys General or Whoppers Jr.

Mostly because I didn't know this picture existed until yesterday, and I think we could do some great things with it. (I'm working on one that lists John Beilein's favorite soups -- CHOWDER HIGH SODIUM -- for example.)

You're familiar with the term "gap year," yes? What if we tried that, but for coaches? Like: everybody agrees that there's no long-term commitment, nobody thinks this is anything more than what it is, but maybe you come take the reins here for a year and, y'know, maybe bring a family member or two with you. And then: clean break, we find our Forever Coach, you go to, like, New Mexico State or something. It could work, right?

Why Brian Wardle on this list? Two reasons, mainly: one, because we needed an alum on the wheel, and, two, because I needed a green-colored wedge, only I remembered after I'd made the thing that Wardle doesn't coach at UWGB anymore. I am a serious person with serious ideas.

The last successful hire Marquette had for the men's basketball team was an internal candidate, right? Well, what if I told you that there's a coach already in the McGuire Center who's got a .726 overall winning percentage (including a .774 mark at Marquette), and who's shown herself capable of taking over for a highly successful coach without the program missing a beat? This is someone who you'd like to talk to, yes?

Folks are worried about his success at Loyola Chicago outside of the tournament runs in 2018 and this season, but I'll tell you what has me more concerned: the spoonerism of his name. I feel like the UConn fans would be very, very mean about this.

Leaving everything else aside, he's a much better public speaker than Wojo.

My well-developed opinion, formed after 12 minutes of Internet research: this dude seems rad and I hope we hire him.

I know he'd worn out his welcome and we're in better shape without him in charge, but I kinda wish Larry Williams was still running the MU Athletic Department right now because my "Larry, I'm on DuckTales" joke would work much better.

If you're familiar with the lore in Anne Rice's Vampire Chronicles series (and who isn't?), you know that vampires can recharge by taking decades-long naps during which they don't have to feed or move around or basically do anything. And, not sayin' but just sayin', it seems like it's been an awful long time since we saw Bo Ryan around, isn't it?